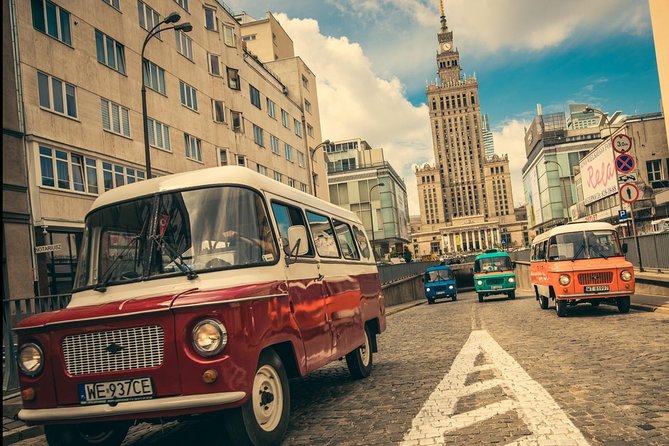 An intriguing trip addressed to those who want to know what the communist period in Warsaw and Poland was like. Political anecdotes, the ideas of rebuilding Warsaw after the Second World War and the absurdities of everyday life of ordinary residents of the city. We will drive a classic communist car, that is, a historic minivan - Nysa 522.
A professional guide will narrate a tour of landmark communist buildings and local history.
Experience the absurdities of communism and set off with us to a city full of history!

Let yourself be taken on an adventure through history on a 4-hour tour of Warsaw. Ride in an original Polish socialist car, the Nysa 522, as you travel all across the city, learning various historical facts and seeing the most important sites that socialism brought. Experience the bygone era of socialism through the typical blocks of flats, monumental palaces, squares, sculptures. and much more.

We will start with the first square ever to be built especially for the working people, i.e. Constitution Square (Plac Konstytucji). Here you will feel how the propaganda worked in the socialist era. This is also the place where we will visit the Museum of Life under Communism. Here you will experience a small apartment furnished in socialist style, a communist party members office, a shop, a bar and a street from the era. You will see how people used to live and watch propaganda movies of the 1950s.

Next we will go towards the seat of the Ministry of Agriculture where you will have a chance to get to know the utopian plans of the post-war city reconstruction. Our next stop will be the Palace of culture and science a gift from Uncle Stalin will reveal its secrets to you.

We will not miss the very heart of socialism, i.e. the old seat of the Central Committee of the Polish United Workers' Party (in Polish: Dom Partii The Party's House).

Next stop is in Praga district where we see the typical housing estate with the longest building in Warsaw.

pick up and drop off

visit in the Museum of life under communism

Entry/Admission - Museum of Life under Communism

Our retro minivans Nysa 522 have not got air conditioning. They have heating system for wintertime.

Our vintage vans h Nysa 522 have not got seatbelts (which is legal with classic vintage cars).

Please wear comfortable clothes because during the tour are short walks.