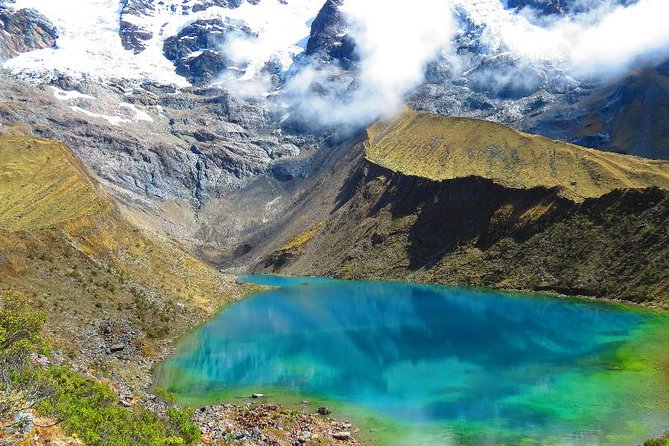 Humantay Lake day trek by the Salkantay mountain, highly recomended for couples or families specially if you are with short time in Peru. After Machupicchu this Humantay Lake trk is perfect to cover all you need to explore in Cusco.
Enjoy our daily departure with small or semi-private groups ensuring personalize services and get the most beautifulexperience on the Humantay Lake.

After Breakfast, we will meet you at 5:00am at your hotel lobby in Cusco to board our private transport. We will drive you for about 2.5 hours to the beautiful village of Mollepata in the rich countryside of the Apurimac valley enjoying the amazing scenic views before we arrive at Mollepata town. For people that they didnt get breakfast at their hotels in Cusco we stop in this village around 30 minutes so you will have the opportunity to have breakfast. Then we will continue our journey towards Soraypamapa campsite (for people that the alternative Inca Trail through Salkantay), the start of our trek, at (4000m/12,750ft). We will start hiking up a moderate slope for one and a half hours until we reach Humantay Lake (4,300M, 14,107Ft). From this point, we can soak in the spectacular views of the Turquoise waters of Humantay Lake that lay peacefully at the base of the picturesque Humantay Glacier and is one of the most stunning places in the Cusco region. After enjoying the most spectacular views we will start our downhill trek for 1.5 hours to Soraypamapa Campsite and have lunch. Finally, after an amazing day journey, we will travel for 2.5 hours in our private transport arriving back in Cusco around 18:00pm.

P.S: If you would like add the Pachamana or Mother Earth ceremonies, please ask so we can include for an extra cost.