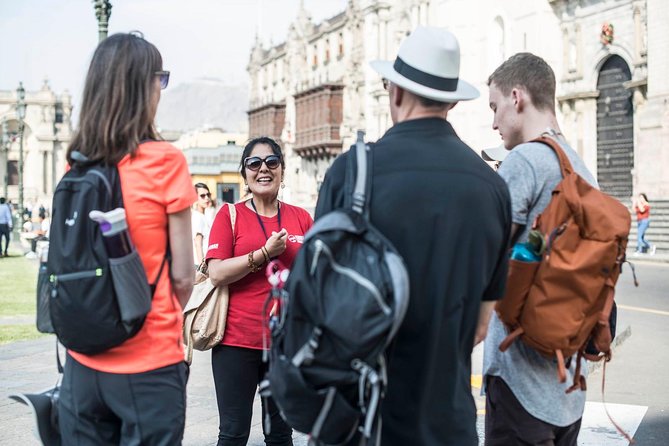 Get your hands on the blueprint to modern Peruvian life on this Lima tour that puts you in the shoes of locals. Admire the colonial balconies, hit the local market and see the great variety of fruits and vegetables reflecting the rich biodiversity of Per and try the best coffee in the world!!

Get your hands on the blueprint to modern Peruvian life on this Lima tour that puts you in the shoes of locals. Admire the colonial balconies, hit the local market and see the great variety of fruits and vegetables reflecting the rich biodiversity of Per and try the best coffee in the world!!
This fun and dynamic tour of Lima is more than a history lesson; it connects you with the heart and soul of this fascinating Peruvian city, from the people who really know what its like to live there the locals. Ditch the history books, as this Lima walking tour will give you everything you need to know!
Youll start the tour by taking the local bus to downtown, just as the locals do, and along the way, youll learn a few words of Spanish something that will come in handy for the rest of your Lima travel experience! Once were downtown, your walking tour will begin with a stroll along Jirn de la Union, a pedestrian avenue linking Plaza san martin to Plaza de armas. Along the way, your local guide will be pointing out the sights along this street, from the hidden gems to the Limas classic tales.
Well stop for a coffee break but this wont be your average cup of joe. Youll be trying one of the best coffees in the world! Not many people know about this Peruvian treasure, and you will have the opportunity to try it!!
Our walk continues towards the most well-known tourist area in the city, Plaza de Armas, located in the heart of the old town, home of the Government Palace, Archbishops Palace and the Cathedral.
Next on this Lima city tour, youll go to the colourful Central Market. With your local guide, youll navigate your way through all the various stalls, checking out the fresh produce and learning about the eating habits of the locals. From jungle, to coast, to altiplano, or high plains, Peru has a rich and diverse food culture, and youll find examples of dishes from all over the country here at this market, and learn about them from a local. Thought Peru didnt have much of a food scene? You can think again!
Then you will visit the breathtaking Basilica of San Pedro, administrated by the Jesuits named after San Pablo, a building so rich in history that it was named a UNESCO World Heritage site back in 1991. As you take in the views of the building and this square, your local guide will be filling you with knowledge about all that you can see.
This Lima tour will come to an end here, where you can continue on your own exploration of the city, or your local guide will be able to point you in the direction of your accommodation.
In a city so important to Perus history and culture, it can be hard to know what to do in Lima to really tap into what it is to be a Limeo. With a local by your side on our Lima Discovery tour, youll get to know the classic stories and local tales of this fascinating Peruvian city.

This is a child-friendly tour. Children between the ages of 6 and 11 inclusively are permitted on this tour at the rate listed above. Please select child above when booking. Children under the age of 6 are permitted to join this tour free of charge. Please inform us at the time of booking if youll be bringing a child under the age of 6. You can do so in the special request box on the checkout page.

Your guide can help you organise a taxi back to your hotel.

Cancellations more than 24 hours before departure will receive a full refund. Cancellations within this period attract a 100% cancellation fee