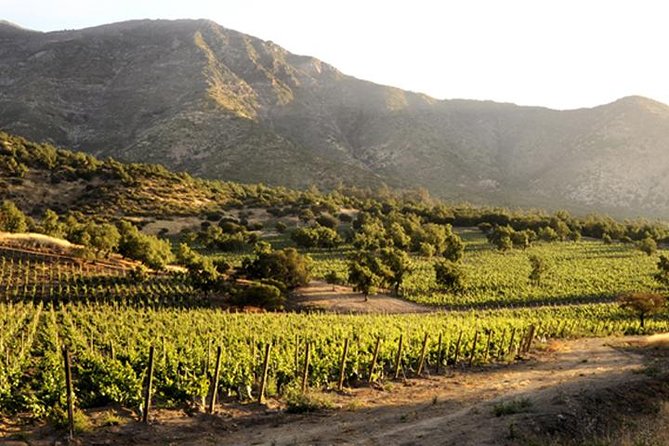 Taste best versions of Maipo valley wines visiting two or three remarkable wineries in the region. Choose between our options of 2 or 3 wineries in full-day and enjoy the classic tours that they offer producing award winning wines all this between beautiful landscapes of the Andean mountains and the central mountains. Visit wine cellars and discover the process of wine making, guided by local experts who will share the secrets about the production. On this tour you can choose the option with lunch included to please your senses and combine delicious traditional meals with best local wines.

Well pick you up from any hotel in the communes of Providencia, Las Condes, Vitacura and Santiago Centro, or in a meeting point in the same communes. Our vans feature air conditioning and a maximum of 8 passengers per tour.

Tour of the wineries which consists of the visit of the villa that have its own character that make difference of the others , where the wine making is carried out and the ancient cellar all this around magnificent garden and landscapes that dazzle every participant. All the tours include tasting of 3 types of wine per tour will make you feel yourself a sommelier.

Well pass through different places of the Maipo Valley in order to visit 2 or 3 wineries depending of your choice. There, youll be able to enjoy the Classic Tour on every winery which includes 3 wine tastings and a wine glass as a gift. Each vineyard has its own character and different settings, which makes the tour a non-monotonous experience and guarantees that each vineyard that you visit will give you beautiful memories.

The wineries that you can choose are Concha y Toro, Santa Rita and Undurraga. Later, the guide will take you to one of the restaurants of the Maipo Valley area, where you can eat something of your choice, or if you wish, you can include the optional lunch of the tour, which includes: appetizer, juices or drinks, main course, reserve wine, accompaniments, salads, and dessert. All of this in a beautiful restaurant with natural decoration.

Later on, well head to the next tour, depending on the selected vineyard, in which youll enjoy again the Classic tour which includes 3 wine tastings plus a wine glass as a gift.

Finishing this tour, well head back to your hotel, or if you wish, to a central point of the city.

Concha y Toro Vineyard
Recognized worldwide as the foremost wine producer and exporter in Latin America, and one of the top ten wine companies in the world. The company has reached popular recognition thanks to its Casillero del Diablo and Don Melchor brands. Visit Concha y Toro's gardens, the par, and admire the exteriors of the summer residence of Concha y Toro family, built in the 19th century. You will also learn about the origin of Concha y Toro wines at the Garden of Varieties, a place where 26 different grape strains are tested. Then visit the vineyard of Old Pirque, offering a panoramic view of the Maipo valley from the vineyard terrace. Finish with a visit to the cellar of the legendary wine “Casillero del Diablo” brand, learning the story about the beginnings of this iconic Concha y Toro wine and enjoying three tastings.

Santa Rita Vineyard
Enjoy the majestic landscape and the big house surrounding the vineyard before the tour starts. Then take a guided tour trough the vineyards, starting at the winery and finishing with the wine bottling process. Visit the historic "Bodega 1" and the famous “Bodega de los 120 Patriotas." The tour finishes with an amazing wine tasting of some great aged wines. You'll also have time to buy some souvenirs or a bottle of wine to have later.

Aquitania Vineyard
Viña Aquitania is located at the foot of the Andes and focuses on producing high quality wines in small quantities. Visitors will have the opportunity to observe the entire process of wine production, where modern equipment is used alongside traditional wine techniques like manual labeling. You'll also get to visit the lookout of the winery, offering a panoramic view of the vineyard. This is followed by a close-up look at the vines to appreciate their state depending on the season. The tour continues with a visit to the wine cellar, barrel room, and bottle storage room and labeling sector. The tour ends with a tasting.

Get a look at one of the winery's most famous wines, The Lota. Then continue to small museum that celebrates the ingenuity of the wine producers of the early 20th century. You'll get a look at their historic processes of bottling and labeling using antique machinery and traditional methods. The route continues on what is arguably the most important jewel of the vineyard, the old room of aging, hidden 20 feet (7 meters) underground. The enclosure is shrouded in darkness and lit only by candles, with extremely cool temperatures thanks to an ingenious system of double walls that keeps it at about 57 °F (14 °C). Among the wines that are tasted, it’s worth mentioning the exotic Gray Wine, a white wine elaborated from red grapes, impregnated with aromas of peach and apricot.

Wine tasting (3 winetasting for every tour) plus glass gift

Aquitania Vineyard is not available for any option during the weekends

Aquitania Vineyard is not available for any option during the weekends

Santa Rita Vineyard is not available for any option on Mondays