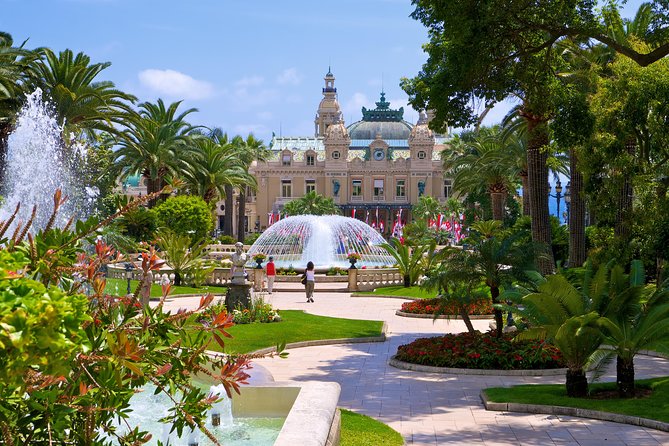 Combine the glitz and glam of Monaco with the medieval charm of Eze on this full-day tour of the beautiful French Riviera. From Monaco, enjoy views of the Mediterranean coast as you head to the lovely hilltop village of Eze, where youll learn about the French art of perfume-making at the Fragonard perfumery. Back in Monaco, watch the Changing of the Guard ceremony at the Prince's Palace, visit Monaco Cathedral, drive along the road used for the world-famous Formula One Grand Prix race, and explore Casino Square in Monte Carlo.

This small-group full-day tour is limited to just eight passengers, ensuring a more personalized experience. During your tour, the guide will provide information in the minivan in order to give you free time to explore on your own.
For Cruisers, in case of last minute cancellation of port of call, an exceptional refund of 50% will be granted upon request.

Your full-day tour begins with pickup from your Monaco hotel in the morning by luxury 8-person minivan. Soak up views as you drive along the Mediterranean coast over Monaco, Nice and Villefranche on your way to Eze. Located on a hill approximately 1,400 feet (427 meters) high, Eze offers breathtaking views of the Cte d'Azur.

This picturesque medieval village is known for its traditional perfumery, Fragonard. Take a guided tour of Fragonard to learn about the process of perfume-making, an exquisite French art, and enjoy browsing its charming artisan shops along the way.

On your journey back to Monaco, drive through the village of La Turbie, known as the 'Terrace of Monaco.' See the Trophy of the Alps (Trophe des Alpes), an impressive Roman monument built by Emperor Augustus 2,000 years ago.

Arrive back in Monaco for a sightseeing tour. This glitzy principality technically the second-smallest country in the world behind the Vatican will enchant you with its beguiling ambiance, chic boutiques, yacht-filled harbor and typical Mediterranean landscape.

Exploring Monaco, your guide will take you to the Changing of the Guard ceremony at Princes Palace (Palais Princier) and through the surrounding medieval village of Monaco-Ville, also known as Le Rocher or The Rock. Here, youll have some free time to have lunch on your own and enjoy sweeping views over the Monaco Port, Monte Carlo and the sparkling sea in the distance.

Visit the Oceanographic Museum (own expense) and see the historic Monaco Cathedral (sometimes referred to as the Saint Nicholas Cathedral), the resting place of Prince Rainier and Princess Grace featuring fine Roman-Byzantine architecture.

Next, cruise down the Circuit de Monaco, the street used as the racetrack in the world-famous Formula One Grand Prix race. Take a stroll around Casino Square and make a photo stop outside of the Casino of Monte Carlo, facing the Hotel de Paris, Caf de Paris and numerous deluxe boutiques.

After your time in Casino Square, youll be taken back to your hotel to conclude your full-day tour.

A passport is required to enter the Monte-Carlo casino