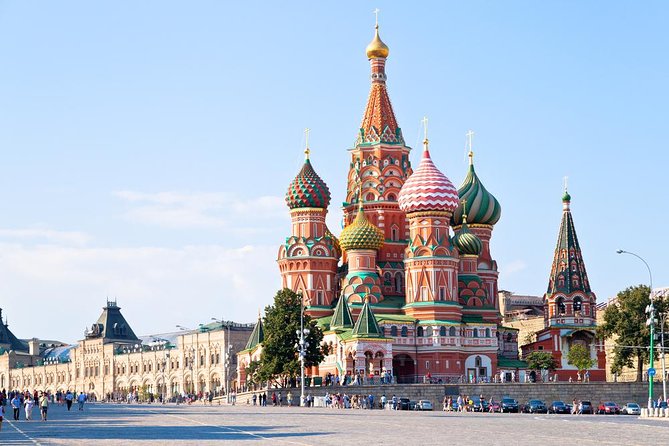 See the stand-out sights of Moscow's Red square, Nikolskaya Street, and Alexandrovsky Garden on a 2-hour small-group walking tour! While listening to captivating commentary about the Russian capital, scout out some of Moscow's top attractions to learn about their history and take photos. See St basils cathedral, the Kremlin, Lenin's Tomb and the Bolshoi Theatre alongside other lesser-known but equally laudable landmarks. Numbers are limited to 10 on this small-group tour ensuring personalized attention from your expert guide.

Meet your guide near the Bolshoi Theater in central Moscow, and then set off with your small group to explore the Russian capital. As you walk, listen to tales of the history, architecture, culture, and politics that make Moscow the hotbed of intrigue that it is today.

While enjoying the entertaining commentary, discover a collection of Moscow's finest attractions and historical landmarks. Stroll through Red square, the beautiful plaza that represents the heart of the city, and then learn about Soviet parades and protests that have taken place there over the years. The candy-colored domes of St basils cathedral stand out as you enter Red square, so wander over to the extravagant landmark for a close-up view.

As much a city Icon as the Kremlin, the cathedral was built to wow and its attention-grabbing architecture and design make for unforgettable photos. Pose against St Basil's colorful facade, and then continue through Red square to Lenin's Tomb, the final resting place of Russia's (arguably) most radical communist leader.

Pass the State History Museum, where Stone Age-era Russian artifacts are housed, and see one of the country's first department stores: GUM. Amble out of Red square and make your way along Nikolskaya Street, admiring its chic boutiques and stately-looking buildings, and stop for photos outside the famous Bolshoi Theatre, a site synonymous with ballet, theater, and scandal.

Continue with a walk through Alexandrovsky Garden to see the Kremlins walls and towers, and visit the Tomb of the Unknown Soldier where the Changing of the Guard Ceremony takes place. Throw a coin in the gardens ruined grotto for luck while hearing stories of the Kremlin: the symbol of the Russian state and one of the worlds most fascinating architectural complexes.

After two hours exploring the city, work your way back to the start point and bid your guide goodbye as your tour finishes.

This experience requires a minimum number of travelers. If it is canceled because the minimum isn't met, you will be offered a different date/experience or a full refund.

Minimum numbers apply. There is a possibility of cancellation after confirmation if there are not enough passengers to meet requirements. In the event of this occurring, you will be offered an alternative or full refund.