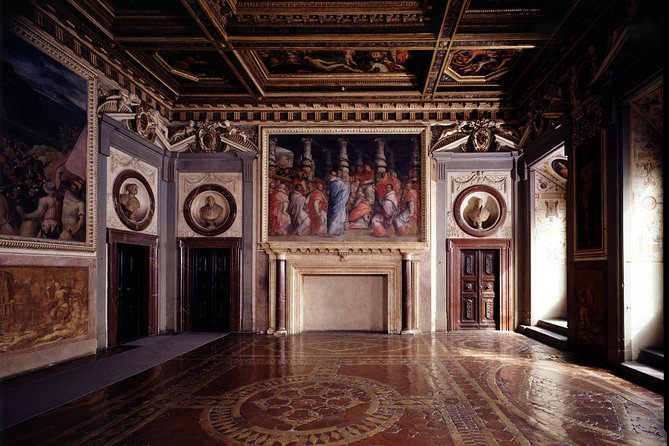 Experience the emotional discovery of hidden locations of Palazzo Vecchio museum, not accessible to the general public, recently opened only for small groups of visitors.

You will ascend the narrow passages of the Duke Gualtieris medieval stairway and you will discover an unexpected path beyond a door hidden by a painting, admire the precious and imposing coffered ceiling of the Salone dei Cinquecento and explore the Medicean Palace from a different and intriguing prospect.

At the end of the guided visit you will continue this experience by enjoying a Florentine lunch in a typical restaurant located in the heart of Florence, by Signoria Square.

Take the opportunity to visit the imposing Palazzo Vecchio with its famous Salone dei cinquecento and the places and paths that are not accessible to the general public.

Located nearby the famous San lorenzo market, you will get to see this grand structure.

Depending on the chosen option: Tuscan Lunch in a typical restaurant or "gelato" tasting

Drinks: to be paid on spot

We suggest to wear comfortable shoes

The entrance time of the Guided Visit can be subject to changes depending on the Museum availability. If our scheduled time is not available, the nearest entrance time will be confirmed.

If lunch option selected: 3-course set menu in a tyical Restaurant in the old town

If Gelato option selected: Taste a delicious "Gelato" in one of the most famous Florentine ice-cream shop