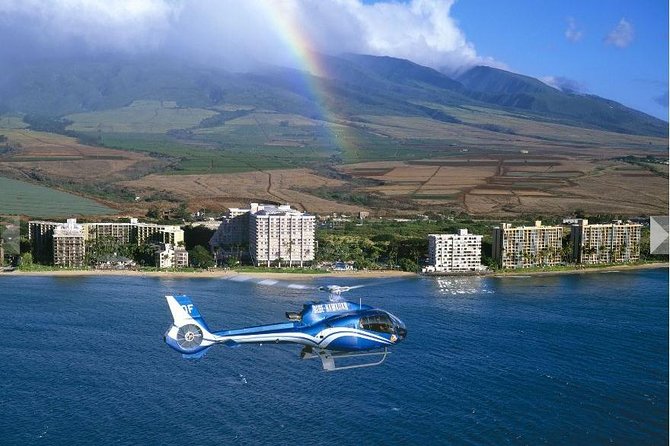 Discover Maui's famous Road to Hana from the ground and from the sky! On this small-group luxury tour, relax on the drive to Hana in a luxury Limo-Van and make several stops along the way, including the Hawaiian village of Keanae, Hana Tropical Gardens and a beautiful cascading waterfall, where youll get a chance to swim. On the reverse leg of the trip, take a scenic flight over the rugged coastline and soak in unbeatable views of the island. This 6-hour experience will surely be the highlight of your visit to Maui!

While in Maui, take a journey along the famous Road to Hana! On this 6-hour, small-group luxury tour, youll experience the Road to Hana from both the ground and sky. Board an air-conditioned, luxury limo-van at the Kahului Heliport and start your drive to Hana. With plush seats, large windows and a maximum of six passengers, this is the most comfortable way to navigate the winding roads, and is a perfect adventure for the whole family.

Youll make several stops along this spectacular coastal drive including the quaint Hawaiian village of Keanae, Waikani falls and Waianapanapa state park and the scenic road leads, of course, to Hana. The village of Hana is isolated from the rest of the island and is known for being the last undeveloped tropical paradise on Maui. Explore the village and stop at the Hana Tropical Gardens for an exclusive tour (included) and learn about the native Hawaiian people, their culture and land. Enjoy fantastic photo opportunities at spectacular cascading waterfalls and crystal-clear pools, where youll have plenty of time to take a refreshing swim.

During one of the stops, enjoy a Pacific Rim lunch served on linen table cloths at a beachside location. Savor grilled chicken and fish, fresh tropical fruits and more not your average deli-style meal! A sample lunch menu can be found below in the Itinerary section.

On the reverse leg of the trip, fly in an air-conditioned, 6- passenger A-Star jet helicopter. During your thrilling 36-minute flight, soar above Haleakala crater, the worlds largest and most famous dormant volcano, and admire fantastic aerial views of waterfalls hidden in remote areas of Mauis rain forest. Enjoy stereo music and live narration throughout this breathtaking experience.

More information about passenger requirements can be found in the Additional Information section below.

The listed price does not include a $15 parking fee, payable at the time of tour check-in.

Weight Restrictions: Due to FAA regulations, all passengers and bags must be weighed at check-in. For each passenger weighing 240 pounds or more, there is an extra charge. This is for the safety and comfort of all passengers. This is payable directly to the tour operator, no later than, one day before the tour. All passengers are weighed by the helicopter company upon check-in.

All passenger weights MUST be advised at time of booking. Maximum weight limit of 325 pounds per person. Under representation of body weight may result in cancellation at check-in with no refund.

Guests must be ambulatory. Walkers, Wheelchairs and/or Scooters, of any kind, are not permitted. Tour operator will deny participation to Guests arriving in or with wheelchairs, electric scooters and / or walkers. Guests with heart or respiratory conditions, oxygen tanks, or generators can not participate. Maximum weight limit of 325 pounds per person.