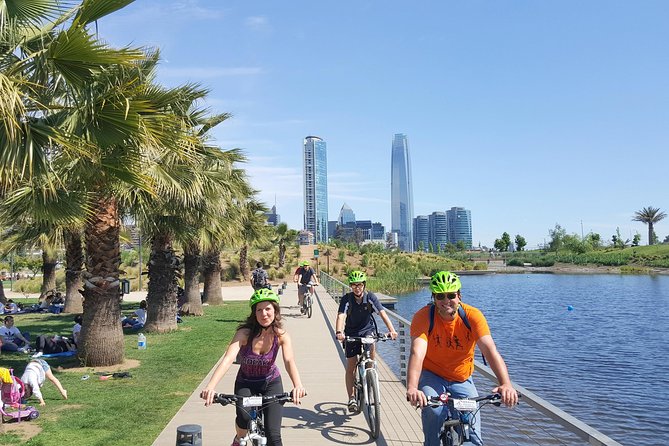 Explore Santiago-chile">Santiago's main parks and landmarks by mountain bike on this 2-hour tour. In a small group of no more than seven, pedal through the cycle paths and park paths of Vitacura, Providencia, and Santiago centro while enjoying the panoramic views offered by the Metropolitan Park, the biggest green area of the city.

Cycle the city streets to absorb the local atmosphere

Meet your guide and group at a central location at the designated time. Put on your provided helmet and gloves, hop onto your bicycle, and set off.

Start your panoramic bike tour close to Metropolitan Park entrance (Pedro de Valdivia), in the heart of Santiago. The route then carries you through the main streets, parks, and landmarks of Santiago.

Bike through the main parks and landmarks of the modern city areas, Bicentennial Park and Sanhattan. Continue the ride by biking up the San Cristobal Hill inside the metropolitan park, until you arrive at the Parque de las Esculturas (Sculpture Park), an open air museum.

After biking a few more blocks, arrive at the Bicentennial Park, home to two artificial lagoons. Get ready to return to the starting point.

Use of Trek 3900 or Mongoose mountain bike