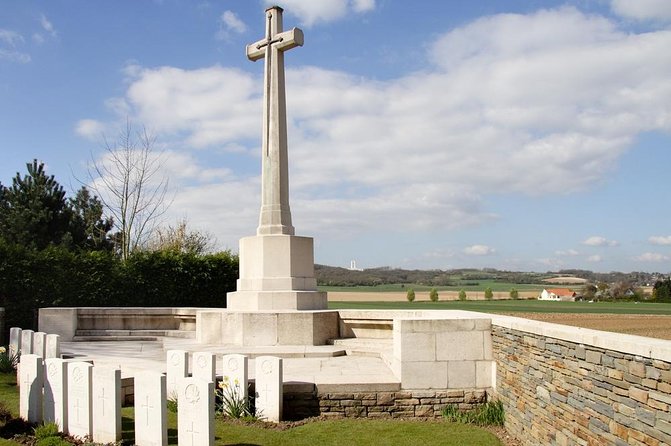 On this Small Group tour of the Somme battlefields, you will discover a part of France that suffered severely in the violent and bloody battles of the Great War. A dramatic period of history took place here, and you will see the major sites including memorials, cemeteries and traces of battles, as well as of course the newly opened Sir John Monash Centre at Villers-Bretonneux. Number of participants is limited to a maximum of 16 people, ensuring you'll receive personalized attention from your knowledgeable guide.

Visit the cemetery of Delville Wood at Longueval, situated on the edge of the Somme. See the Lochnagar Crater "Located at La Boisselle" - an impressive mine hole 100 meters across and 30 meters deep.

See the Australian flag flying over Poziere in recognition of the sacrifices made by the ANZAC's in the battle that took place here during the battle of the Somme. This battle was followed by the battle of Mouquet Farm which you will also visit today.

Continuing to Thiepval, you will see the largGare de l|est memorial dedicated to missing British Soldiers. You will also visit The Ulster Tower, a memorial to the men of the 36th Ulster division, the Beaumont-Hamel and the Newfoundland Memorial which offers a realistic and moving view of these battles in its remarkably well-preserved trenches system. During this day-trip you will also see the the Australian National Memorial at Villers-Bretonneux.

Finish the tour with a visit to the Historial at Peronne, an international and cultural museum of the first world war (1914-1918) which explains the conflict, its origins and its consequences.The museum boasts a unique collection of over 50,000 original objects and documents of everyday life during the war.

Be sure to arrive promptly for your tour.

The group will not wait if you are late and if you miss the tour due to a delay, you will not be entitled to a refund.