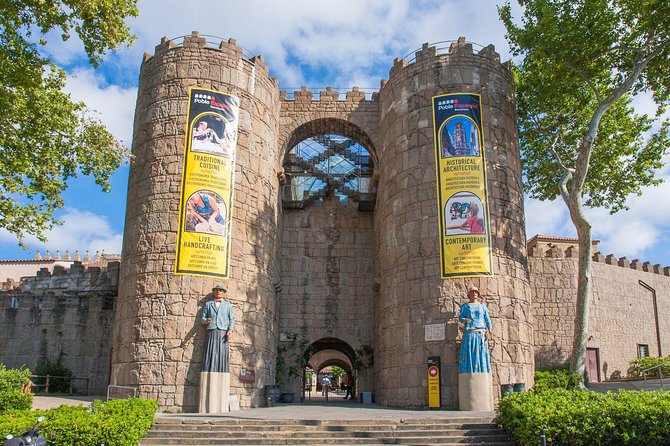 Set on Montjuc Mountain and with excellent communications with the center of Barcelona, Poble espanyol is the only place in the city that allows you to discover the soul of Spain. Take a pleasant, peaceful stroll through its streets and squares, admire its buildings and contemporary art collection, watch the craftsmen as they give shape to their works and dont miss the brand new multimedia installations to get to know the Spanish culture and traditions. Explore the entire soul of a country.

Built in for the International Exhibition of the same year, Poble Espanyol is a recreation of 117 real-life scale buildings representing different regions of Spain. As you wander through it, you will see Spains extensive and varied architectural heritage, from the Andalusian quarter to the Romanesque-style monasteries of Catalonia. You will also be able to watch craftsmen making glass, leather or jewels, among other products, as they shape unique pieces with their hands. This is what makes Poble espanyol a truly singular shopping center in Barcelona, open 365 days a year.

Step into Spanish culture through our new immersive installations. Discover the landscapes and traditions with Feeling Spain and feel the excitement of the popular festivals with Fiesta, an amazing multimedia experience.

You can also have the chance to admire the works of famous Spanish and universal artists. The Fran Daurel Museum houses works by Picasso, Dal and Mir and up to 300 works exhibited in the Sculptures Garden, a large area in which nature and art come together in harmony.

Big slides for children and adults