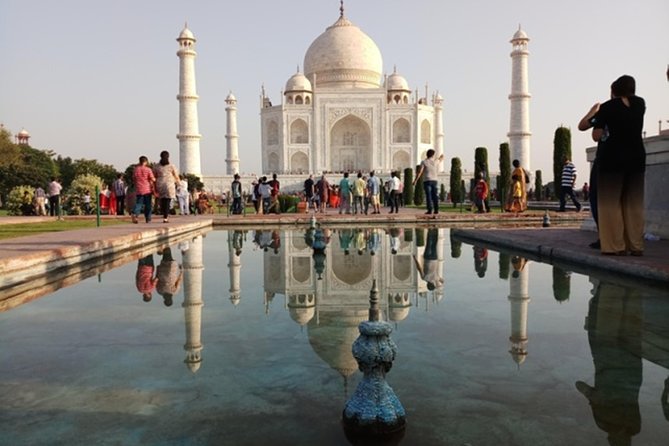 Itinerary
This is a typical itinerary for this product
Stop At: India Gate, Rajpath Near Connaught Place New Delhi, New Delhi 110001 India
India Gate is a memorial to 70,000 soldiers of the British Indian Army who died in the period 191421 in the First World War, in France, Flanders, Mesopotamia, Persia, East Africa, Gallipoli and elsewhere in the Near and the Far East, and the Third Anglo-Afghan War. 13,300 servicemen's names, including some soldiers and officers from the United Kingdom, are inscribed on the gate
Duration: 2 hours
Stop At: Humayun's Tomb, Mathura Road Opp Nizamuddin Mosque, New Delhi 110013 India
Humayun's tomb is the tomb of the Mughal Emperor Humayun in Delhi, India. The tomb was commissioned by Humayun's first wife and chief consort, Empress Bega Begum (also known as Haji Begum),in 1569-70, and designed by Mirak Mirza Ghiyas and his son, Sayyid Muhammad,Persian architects chosen by her.It was the first garden-tomb on the Indian subcontinent,and is located in Nizamuddin East, Delhi, India, close to the Dina-panah Citadel, also known as Purana Qila (Old Fort), that Humayun found in 1533. It was also the first structure to use red sandstone at such a scale.
Duration: 1 hour
Stop At: Taj Mahal, Dharmapuri, Forest Colony, Tajganj, Agra 282001 India
The Taj Mahal meaning "Crown of the Palaces") is an ivory-white marble mausoleum on the south bank of the Yamuna river in the Indian city of Agra. It was commissioned in 1632 by the Mughal emperor, Shah Jahan (reigned from 1628 to 1658), to house the tomb of his favourite wife, Mumtaz Mahal. It also houses the tomb of Shah Jahan, the builder. The tomb is the centerpiece of a 17-hectare (42-acre) complex, which includes a mosque and a guest house, and is set in formal gardens bounded on three sides by a crenellated wall.
Duration: 3 hours