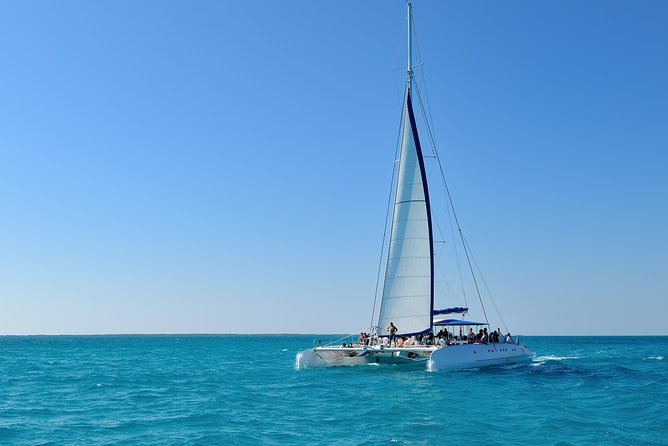 Spend the day sailing aboard a beautiful catamaran along the tropical west coast of St. Lucia. Go ashore to see the island's landmark, the Pitons, soaring over 2,000 feet (600 meters) in the air. Visit the Diamond Botanical Gardens and explore the natural beauty of the waterfalls before heading to the Sulphur Springs inside the Caribbean's only drive-in volcano. You'll also have time to relax and swim in the warm tropical water.

Sail from either the Castries or Rodney bay marina and enjoy lovely ocean views, as you sail down to Soufriere.
Witness the pitons from a unique angle aboard your catamaran.
Enjoy the scenery and marine life of Soufriere Bay.

Drive through the scenic town of Soufriere on your way to the Diamond falls/Botanical Gardens.
Walk through an amazing botanical garden, filled with a fantastic array of topical plants and flowers.
Come face to face with the cascading waters of the famed Diamond Falls.

Walk through the world's only drive-in volcano.
See the Sulphur mud baths.
Learn the history of the volcano with a guided tour.
Take in the majestic landscape and surroundings.
Make memories, by capturing several Kodak moments.

The chance to snorkel at Anse Cochon beach.

The opportunity to see the renowned Marigot bay.

Hotel pickup and drop off (North Island hotels only)

This tour requires a minimum number of passengers to operate. There is a possibility that the tour may be canceled after confirmation if there is not enough passengers to meet requirements. In the event of this occurring, you will be provided the option to take the tour on an alternative date or be refunded in full.

It is recommended that you bring a camera, sunscreen, swimsuit, and beach towels.

Please note: Hotel pickup and drop-off included from North Island hotels ONLY. If you are located in a South Island hotel you will need to arrange for your own transportation.