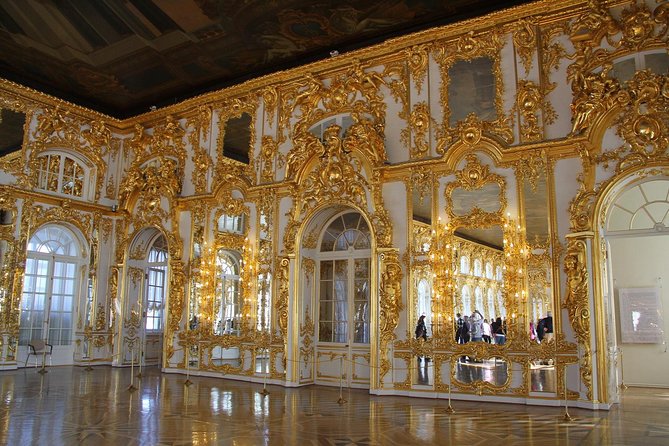 Enjoy this day tour which includes a city tour of St. Petersburg and a visit to Tsarskoye Selo and Pavlovsk and then experience a traditional Russian lunch in a typical national restaurant. At the end of the tour you will have an option of a tour extension by taking a boat excursion on the Neva river.

Come and discover during this St. Petersburg Highlights Day Tour including Tsarskoye selo and Pavlovsk. Step back to the days of Russias 18th-century on a 4-hour tour of The catherine palace in Tsarskoe Selo. Travel from St Petersburg by private vehicle on the same road as Catherine the Great did at her time. Visit the Palace interiors, including the Amber Room, spectacularly coated in amber and mirrors. You will also get to admire the gardens and garden pavilions.

Formerly known as Tsarskoe Selo, Pushkin is home to one Russias grandest royal estates The catherine palace, built in the 1700s as a residence for Catherine I and once called the Palace of Tsarskoe Selo. Originally modest, the palace was remodeled by Catherines daughter, Empress Elizabeth, in the mid-1700s, who turned it into the extravagant baroque residence of today. On arrival, absorb the blue-and-white facade and take a guided tour inside. Marvel at the rococo state rooms and halls embellished with stucco, frescoes, marble and visit the showpiece the extraordinary Amber Room. Covered in amber panels that replicate the originals looted by the Nazis in World War II and subsequently lost, this spectacular room is a vision of shimmering amber work, gold leaf and mirrors. The original room was dubbed the Eighth Wonder of the World and todays replica was made using 13,000 pounds (6,000 kilograms) of amber.

After a traditional Russian lunch, continue your tour. Pavlovsk is little known to tourists but it deserves no less attention. Catherine, happy with the birth of his first grandchild (the future Emperor Alexander the 1st) gave this land to her son Paul and his wife. They have turned this country house and Park in a sample unsurpassed taste and harmony. Suffice it to say that the collection of ancient sculpture in Pavlovsk is considered second, after the Hermitag.

10am You will be picked-up in your hotel lobby and head off to Tsarskoye Selo.
11am Visit to the Catherine Palace and the Amber Room.
12pm Walk in the Catherine Park - landscape and regular parts of the park.
1pm A lunch of a delicious three-course meal in the restaurant of Russian cuisine in Pushkin.
2pm Departure to Pavlovsk.
2:30pm Visit to Pavlovsk Palace and a walk in the park.
4pm Return to St. Petersburg.
5pm Walk around the evening city and on request boat tour on rivers and canals or a night tour of the Neva under the bridges with champagne. Return to the hotel