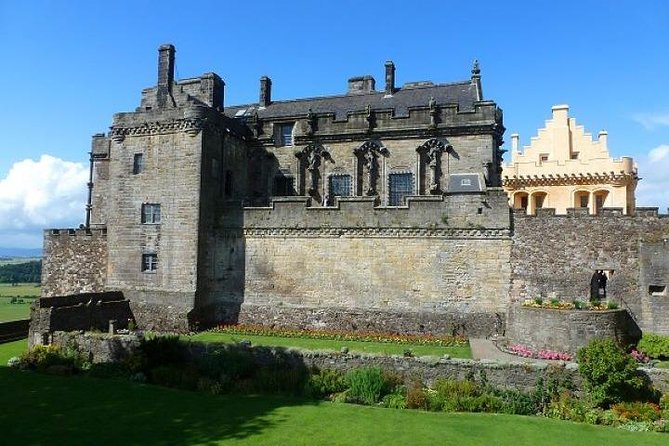 This Tour Is Flexible For Cruise-Ship Passengers At Port Greenock And For A Day Trip From Glasgow Hotels!

En-route passing Glasgow city to the heart of Scotland and imagine going back in time to Medieval when Stirling was The key to the Kingdom. Wars and real life Bravehearts like William Wallace & King Robert the Bruce fighting for freedom. Visit the biggest best castle in Scotland where Mary Queen of Scots and her family, the royal Stuarts reigned for Centuries. Next, after a tasty lunch, enjoy world class experience drinking the finest Scotch single malts at the Glengoyne whisky distillery. Slainte Mhor.

Itinerary
This is a typical itinerary for this product
Stop At: Cambuskenneth Abbey, Cambuskenneth village Nr Stirling, Stirling Scotland
Monastic ruin dates from AD 1300 and has a plot with the remains of Scottish Braveheart hero William Wallace.
Duration: 15 minutes
Stop At: Stirling Bridge, Bridgehaugh Road, Stirling Scotland
Short walk onto ancient 500yrs old bridge.
Duration: 15 minutes
Stop At: Stirling Castle, Castle Esplanade Upper Castle Hill, Old Town, Stirling FK8 1EJ Scotland
Explore the key to the Kingdom of Scotland. The largest and most important fortification throughout the centuries, as well being the main royal palace for the Stuart dynasty.
Duration: 1 hour 30 minutes
Stop At: Balfron, Balfron, Scotland
The Clachan Oak, Balfron, Stirling, a sessile oak which William Wallace is said to have rested against, and later Rob Roy Macgregor is supposed to have hidden here. It is held together by wide iron rings to which criminals were chained as punishment.
Duration: 5 minutes
Stop At: Killearn, Killearn, Scotland
Monument here to George Buchanan was a 16th Century Scottish historian and humanist scholar.
Duration: 5 minutes
Stop At: Glengoyne Distillery, Dumgoyne, Glasgow G63 9LB Scotland
Scotland's gift to the world we say. Find out how our whisky is made and taste the spirit of Scotland. The Glengoyne is a world famous quality Scotch.
Duration: 1 hour

Children Must Use A Child Car Seat Until 12 Years Or 135cm Tall, UK Law.