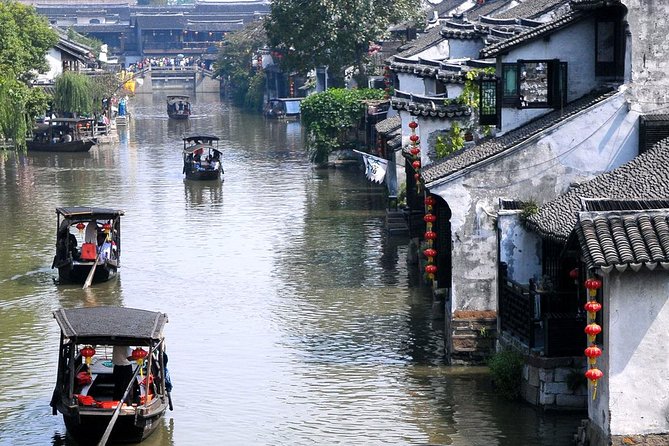 The Suzhou Essence Tour will take you to explore the tranquil beauty of Suzhou. Enjoy Lingering Garden, originally a classical private garden, it is one of the four most famous gardens in China. You can have a chance to take rickshaw ride in Suzhou becomes a key part of the urban landscape. Take a boat ride on Grand Canal to see wonderful example of a waterside town with whitewashed and black-tiled-roof houses and small bridges.

Pick you up at your hotel lobby in Suzhou where you live or Suzhou train station.

Firstly, you will visit Lingering Garden, a UNESCO World Heritage Site and one of the city's finest classic gardens. Wander through the trails and portals of this delicately-planned garden that carefully combines traditional Chinese architecture with natural beauty.

Next head toGrand Canal (Including Private Boat Ride)(also known as the Beijing-Hangzhou Grand Canal), a UNESCO World Heritage Site, is the longest canal or artificial river in the world and a famous tourist destination. It is the oldest and longest artificial waterway in the world. The Grand Canal in Suzhou, with wide surface, abundant and crystal clear water, has been the best part of the Grand Canal for shipping. The old canal is about 35km long from Hushu Pass to Wujiang City, running through the centre of town and there is a network of smaller canals and passageways. It is a wonderful example of a waterside town with whitewashed and black-tiled-roof houses and small bridges.

After lunch, take Rickshaw ride in Suzhou city. It likes the rickshaw in Beijing, you will see the small Hutongs, the open markets and the local people's life more clearly. And the professional rickshaw pullers are often familiar with Suzhous history, culture and folk customs, from whom you will gain a more understanding of traditions and cultures of this famous garden city.

Later move on to Shantang street, which was one of the streets which trade and culture were most highly developed in Ming and Qing dynasties, regarded as the No.1 Ancient Street in China. There is a folk song, singing There is a paradise in heaven, but there are Suzhou and Hangzhou on the earth. Hangzhou has the West Lake while Suzhou has Shantang. Both are good places with boundless sceneries, which is the vivid image of Shantang.

Then visit the Suzhou No. 1 Silk Mill. Suzhou has a long and rich history of silk culture, including mulberry tree and silk worm cultivation and turning raw silk into beautiful fabric. The Suzhou No. 1 Silk Mill more like a museum which shows you how the silk is made from cocoons from the beginning and the whole silk process. Not to be missed

You will be taken back to the Suzhou train station or your hotel lobby and your tour ends.