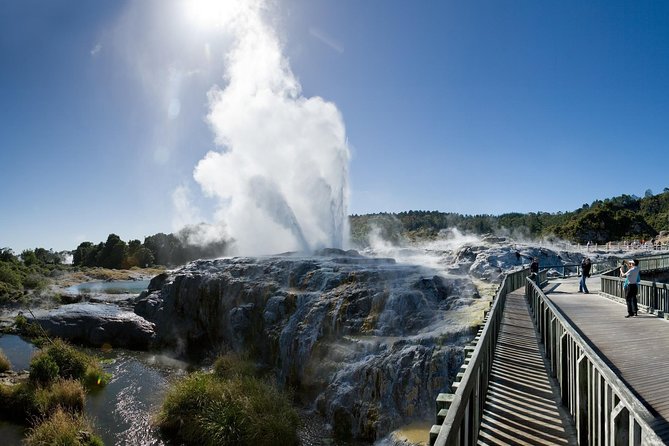 Join us on this small group tour from the Port of Tauranga!

One day in port and so much to see, let us take you there as we stop at some favourite stops along the way.

Take in the Beautiful Mount Maunganui beach and surrounding area.

Learn how the Maoris have utilities this landscape for cooking, bathing and heating.

Enjoy a live cultural performance show with songs and dance including the Haka.

Highlights drive and stops around Rotorua.

Museum and Government gardens including the rose gardens.

Plenty of time for rest stops, photo opportunities and gift shopping along the way.

Itinerary
This is a typical itinerary for this product
Stop At: Te Puia, Hemo Road, Rotorua New Zealand
Te Puia dials up the heat on Moritanga (things Mori) with explosive performances from both its cultural troupe and from Phutu (Big Splash), its famous geyser which erupts around 20 times a day, spurting hot water up to 30m skyward. Youll know when its about to blow because the adjacent Prince of Wales Feathers geyser will start up shortly before. Also here is the National Carving School and the National Weaving School, where you can watch the students at work.
Your visit include's an informative guided tour of the entire complex, which also features a wharenui (carved meeting house), a recreated precolonial village, a nocturnal kiwi enclosure and the Whakarewarewa valley thermal zone, including three major geysers and a huge pool of boiling mud. After the tour you're welcome to wander around at your leisure.
The gift shop gives you the opportunity to buy genuine Mori art and craft, along with beauty products made from Te Puia's mineral-rich mud.
After leaving Te Puia we board for sightseeing tour around Rotorua!
Duration: 2 hours
Stop At: Blue Baths, Government Gardens 1 Queens Drive, Rotorua 3010 New Zealand
The Stunning Art Deco Heritage Building, the Blue Baths opened in 1933. Having been stylishly refurbished this Spanish inspired building with geothermally heated pools
Duration: 5 minutes
Stop At: Government Gardens, Queens Dr 9 Queens Dr, Rotorua New Zealand
In the late 1800s, the Maori people gifted 50 acres of this land to the Crown "for the benefit of the people of the world". The land was a geothermal area with several therapeutic pools. Formal gardens were planted and several large trees remain from those early days, including multi-trunked Japanese firs and an unusual Californian weeping redwood. Following the ratification of the original gift in 1883, the reserve was vested in the Government of New Zealand in 1898 as an area where the thermal waters could be used and promoted as a health spa similar to those in Europe.
Today, the Rotorua Lakes Council operates a nursery in Government Gardens which annually produces 420,000 bedding plants for display within the citys 150 flower beds. The nursery also grows around 6000 potted plants for display work and 15,000 trees and shrubs annually.
The Gardens provide facilities for bowls, croquet, petanque and golf (the Motutara course is leased to private operators); and a soldiers' memorial for servicemen belonging to the local Te Arawa tribe, the Klamath Falls Rose Gardens, Te Runanga Tearooms, a band rotunda and various buildings of historic interest are also located here.
Klamath Falls Rose Gardens
The Klamath Falls Rose Gardens are situated on Queens Drive and are named after Klamath Falls in Oregon, North America a sister city to Rotorua. Roses are in bloom from mid-November to June and are at their best during the summer months.
Te Runanga Tea House (The Meeting House) was built in 1903 and was originally intended to be a tea pavilion.
This was built in 1900 overlooking the bowling greens and more recently was shifted to its current location.
The Government Gardens is also home to the famous Rotorua Museum and the restored
Duration: 15 minutes
Stop At: Kiwifruit Country, 316 State Highway 33, Paengaroa 3189, New Zealand
A chance to visit a working kiwifruit orchard and learn about this wondrous fruit and how it all became part of the New Zealand landscape!
Our stop here allows for fast testing of different varieties of fruit along with an assortment of jams, chutneys, and various drinks on offer.
Kiwifruit thrives in the Bay of Plenty with its unique combination of a temperate climate, close proximity to the ocean, volcanic ash soils and landforms make this the ideal place to grow kiwifruit and allows for a last stop on the way back to your cruise ship.
Duration: 30 minutes