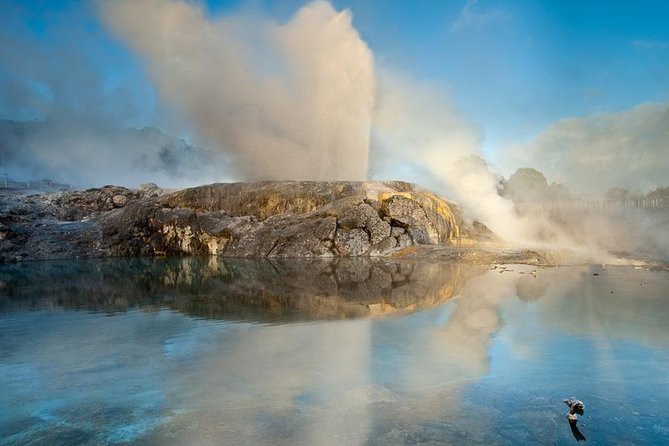 Enjoy a full-day, small group tour to Te Puia in Rotorua to experience the world-famous Pohutu Geyser, and more than 500 natural geothermal wonders.Rotorua is the Geothermal Wonderland of New Zealand and a "must visit" destination for any Tauranga cruise ship passengers.
View the Government Gardens, lakefront, scenic and city sights as well as the wildlife, redwood trees, the crystal clear waters of Hamurana Springs, and theand the spectacular Okere Falls.

Your scenic drive from the Port of Tauranga takes you from Mount Maunganui through the beautiful New Zealand countryside to arrive at Te Puia in Rotorua the home of bubbling mud pools, hot pools, the world famous Pohutu geyser, and the New Zealand Arts and Crafts Institute. There are not many places in the world where geothermal activity is as extensive and accessible as right here and your Maori guide will take you on a tour of this incredible natural wonder. This valley is alive with bubbling mud pools, erupting geysers, and hissing steams including the world-famous Pohutu and the six neighboring geysers in an area known as Geyser Flats.

You will have the opportunity to view the endangered Kiwi bird in their own specially lit house. Your visit directly helps with conservation efforts for this iconic bird that is so special to New Zealand. You will also experience a Maori cultural performance including traditional songs, the captivating poi dance and the world-famous haka (war challenge) with the opportunity for visitors to take part in a more intimate Maori cultural experience only available at Te Puia. Lunch is not provided however there is time to purchase food and beverages at Te Puia.

Enjoy lunch at Te Puia (not included) before re-boarding your vehicle and traveling into Rotorua to see the main sights of this geothermal city including the famous Government Gardens, Blue Baths (a historic bath house), Rachel Spring (a boiling hot pool reaching temperatures of up to 100degC), lakefront and scenic sights.

Your journey draws to a closestopping to viewthe spectacular Okere Falls and a scenic drive viewing thelocal highlights, pristine coastline, kiwifruit orchards, and more.You will arrive at the Port of Tauranga passenger gate at least an hour prior to your ship sailing time.

Please note: The order of sites visited may vary. In the event of scheduling changes with ship arrival or departure, we reserve the right to alter the itinerary to accommodate these variations.

Don't forget to bring your camera.