Taxco And Cuernavaca From Mexico City - With Reviews & Ratings

Taxco And Cuernavaca From Mexico City 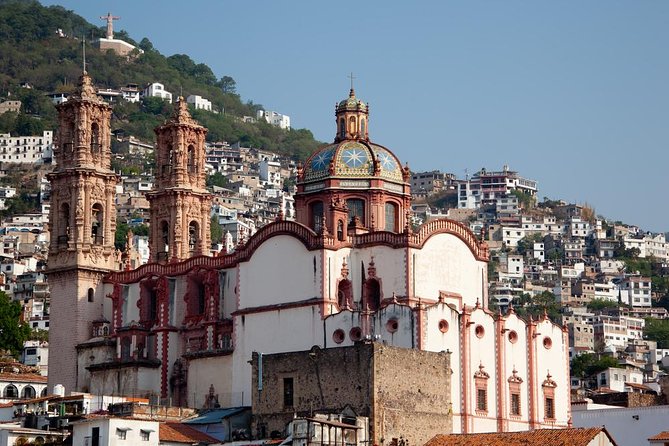 Soak up the perfect climate of 'The City of Eternal Spring', Cuernavaca and enjoy a scenic drive to Taxco, the colonial silver mining city on a full day guided coach tour from Mexico city. You'll have the opportunity to purchase some of Mexico's beautiful jewelry and handicrafts as you become captivated by this city's extraordinary Old World ambiance!

Head to Cuernavaca, a popular weekend retreat for Mexico city residents, where a small city tour will be given. It is a beautiful city known as the 'city of eternal spring' for its joyous atmosphere and enjoyable climate.

You'll then take a scenic drive to Taxco, which is known as the 'silver city' and is one of the prettiest towns in Mexico. The city tumbles across a hillside with winding cobblestone streets, tile roofed buildings, cozy squares and a strong Old World ambiance that has survived for hundreds of years.

You'll then visit one of Mexico's grandest churches, Santa Prisca (please read additional information). It was built in 1759 by French immigrant Jose de la Borda who literally stumbled upon a huge silver claim. Santa Prisca is a riot of ornate Baroque styling flanked by twin bell towers. The interior displays some of Mexico's beautiful goldleaf ornamentation. You'll have plenty of time to have lunch and also visit the marketplace and the famous silversmith shops!

After seeing Taxco, it is time to head back to Mexico city where you'll be driven back to your hotel.

Pickup and drop-off from most downtown Mexico City, Reforma and Polanco hotels included

Note: The duration of this tour may vary due to traffic and/or weather conditions

Important: Itinerary is subject to change during holidays and special occasions. Please kindly contact the local tour operator for information and confirmation

After september 19 th of 2017, many buildings are being restored, both catedrals, the one in cuernavaca and the Santa Prisca in Taxco are not the exception, works are done by small areas to not to affect tourist from visiting this beautiful buildings, in case that one part is closed, other are open for you to enjoy the visit.