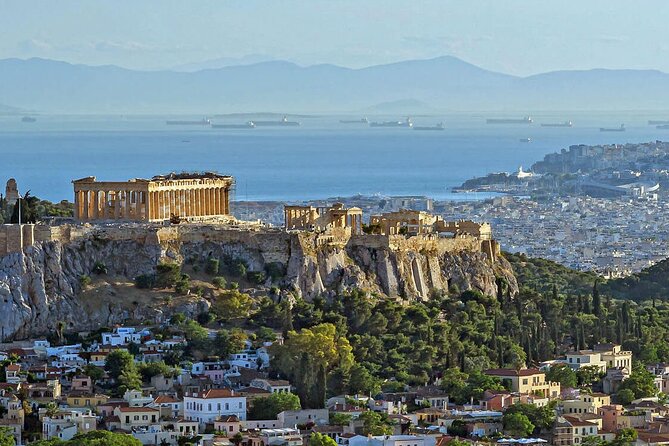 An 8 hours private shore excursion in Athens
Visit boththe Acropolis of Athens with its Parthenon & the new Acropolis museum
Visit the picturesque neighborhood of Plaka and have a free time to enjoy lunch in a Greek restaurant
Highly recommended for cruise passengers visiting Athens for a whole day or for several hours
Professional English speaking tour driver
Travelers can customize the tour within the itinerary!

The private tour starts early morning from your Hotel or any other place convenient to you.

Your driver will drive you towards Queen Amalia Avenue by the Tomb of the unknown soldier and the House of the Parliament located at the famous Syntagma Square (Constitution Square).

Then the private tour continues towards the Panathenian Stadium, which is also known as the Kallimarmaron Stadium, the site of the first modern Olympic Games in 1896 in Athens.

The tour continues towards Panepistimiou Avenue where you can see the Catholic Cathedral of Athens and the Trilogy of Neoclassical Buildings of Athens.

Temple of Parthenon in the Acropolis of Athens, the Academy of athens, the Athens university and the National library will definitely impress you with their aesthetics and architectural design.

The tour to Athens continues with a drive to the Temple of Zeus and the Hadrians Gate that blend the Ancient and Roman Era in Athens. The destination now is the crown of the city, the imposing Acropolis of Athens with its glorious Parthenon.

The Parthenon is the most characteristic example of classic architecture of the 5th century BC, constructed to house the immense statue of Goddess Athena, the protector Goddess of the city.

You will get to see the Propylaea, the Temple of athena nike and the temple of the Erectheion that is mostly known due to the statues of the Caryatides, the Porch of Maidens.

Once you descend from The acropolis, you have the chance to visit the New Museum of the Acropolis that is built at the feet of the Sacred Rock and admire the marbles of the Parthenon and an impressive collection of artifacts and relics found on the Acropolis during the excavations.

Later on, the private tour will drive you through Plaka, the picturesque quarter of the city, where you can see lovely little shops with handmade crafts and gifts, the Ancient agora of Athens where the philosophers and orators of Athens used to present their views and Roman agora.

The full day tour to Athens will also give you the chance to get a glimpse of modern Athens as well, visiting the fish and meat market in downtown Athens and walking by the Monastiraki market, which is the famous flea market of the city.

However, a visit to Athens is never complete if you do not get to taste the famous Greek cuisine; the tour will take you to a traditional Athenian restaurant or tavern, where you can indulge to the colors and flavors of the most known Greek dishes (home cooked food).

Finally, you will enjoy the breathtaking views from Lycabettus Hill, which is the highest hill in the city of Athens, to take some spectacular pictures and an image of the entire city in your hearts and minds.

Hotel pickup and drop-off in Athens

Entrance fees to the archaeological sites and museum

Important note: You will have a professional English-speaking driver with good knowledge of the history and culture of Greece, to guide you till you enter archaeological sites and museums according to the program. Tour drivers are not licensed to companion you inside the archaeological sites and museums. If you'd like to have one, we can arrange it for you at an additional cost. Licensed by the state tour guides are freelance and it is subject to availability on bookings day!

Athens International Airport transfers can be arranged on request