The Best Sights Of Kiev In 3 Hours. Private Tour By Car

The Best Sights Of Kiev In 3 Hours. Private Tour By Car 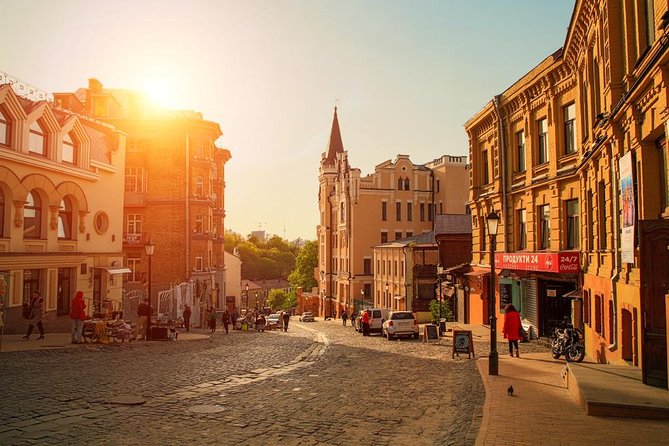 Our private city tour is the best way for you to get acquainted with our ancient wise and at the same time young and modern city Kyiv. You will explore such beautiful and breathtaking sights as Kyiv Pechersk Lavra and Saint Sofia, visit the most ancient hill among 33 hills in Kyiv where Kyiv arose in the 5th century, take pictures of the highest statue of soviet times The Motherland. You will visit all the main interesting sights and hear a lot of useful information about the capital of Ukraine from your local guide.

Duration: 20 minutes
Stop At: St. Andrew's Church, Andreyevskiy Spusk, 23, Kiev Ukraine
Later on the way, your guide will offer to stop at Detyniec (Old Kyivs hill), Andriivskiy Descent that is known as Kyivs Montmartre. Walk down the most ancient street of entire Eastern Europe and explore its open-air market with plenty of traditional souvenirs here, as well as vintage and hand made things.

Duration: 40 minutes
Stop At: Golden Gate, Vladimirskaya st., 40a, Kiev Ukraine
Then we stop at the Golden gate monument which is one of the most important historical sights in Kyiv due to its 2 walls of the main citys access in the 11th century.
Duration: 10 minutes
Pass By: National Opera House of Ukraine, Volodymyrska 50, Kiev Ukraine
You'll pass by Opera house, Monument to Mykhailo Hrushevsky (a prominent political and public figure).
Stop At: National Taras Shevchenko University of Kyiv, Volodymyrska vul. 60, Kiev 01601 Ukraine
The next stop is at Taras Shevchenko Monument and a famous red building of the National University which is one of the highlights of the Kyiv city.

Duration: 5 minutes
Stop At: Pechersk Landscape Park, Lavra Street, Kiev Ukraine
Later on, you will be taken to the governmental district of Pechersk Lypky to explore the Administration of the Ukrainian president, the most beautiful house with chimaeras built by Kyivs Gaudi Vladislav Gorodetski, the National bank of Ukraine, The Parliament and a palace surrounded by the most beautiful park in Kyiv.

Duration: 30 minutes
Stop At: The Ukrainian State Museum of the Great Patriotic War, Lavrska St, 24, Kyiv, Ukraine, 01015
The next stop will be at the open-air museum of Grand Patriotic war, where you will take pictures of a huge soviet statue of Mother Land, then you will see a remarkable view on Kyiv Pechersk Lavra monastery with its shiny golden domes.

Duration: 10 minutes
Stop At: Holodomor Genocide Museum, Lavrska St, 3, Kyiv, Ukraine, 02000
On the way back to the city centre you will be stopped at Memorial complex of starvation located on one of the hills with an amazing view on a left bank of river Dnipro.
Duration: 15 minutes
Pass By: The Cabinet of Ministers - Budynok Uryadu (The Government), Hrushevskoho Mykhajla vul. 12/2, Kiev 01008 Ukraine
Then you will pass by the Ukrainian government, European square and a huge Arch of friendship.