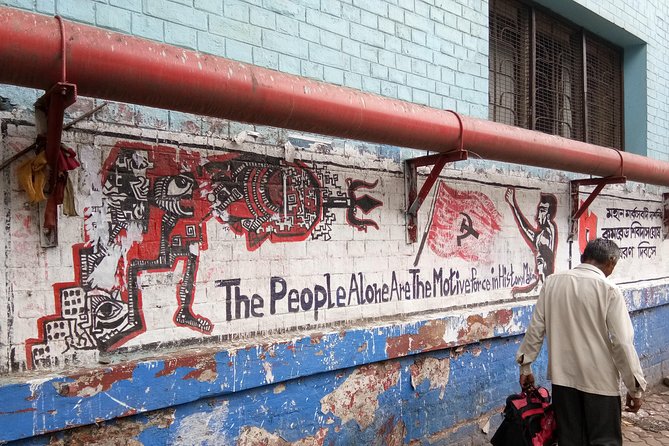 Welcome to the Future!!
A place is not a mere geographical entity. It is a living existence.
Discover the life of Kolkata with our unique cinematic tour.
This tour is based out of a script which depicts Kolkata as a living existence and traces her journey from the past to present, the guide functions as the director who takes the participants to different parts of the place which have been selected as sets and the people present in those parts doing their everyday task become the actors.
The guide or in this case the director follows the script and enact it in real time which is based on five factors namely:
History, Geography, Economy, Culture and Food embedded in it. The whole tour follows the script and moves in the fashion as a movie would move.

Itinerary
This is a typical itinerary for this product
Stop At: Armenian Holy Church Of Nazareth, 2 Armenian Street, Kolkata (Calcutta) 700001 India
Begin your journey with the script reading session in the oldest church of Kolkata. Where we read out the script to help you understand Kolkata's journey from past to present.
Duration: 20 minutes
Stop At: Malik Ghat Flower Market, Southeast end of Howrah Bridge, Kolkata (Calcutta) India
Explore one of the busiest and oldest flower markets of Asia. understand trade and commerce with accordance with significance to religion.
Duration: 45 minutes
Stop At: Howrah Bridge, Jagganath Ghat 1, Strand Road, Kolkata (Calcutta) 700001 India
Walk across the busiest and one of the longest cantilever bridge of the world. This is where we understand the motion of the city.
Duration: 20 minutes
Stop At: BBD Bagh, south of Howrah Bridge also known as Lal Dighi, Kolkata (Calcutta) 700001 India
We arrive at the white town of Kolkata from Howrah. An ideal spot to witness the office culture and the most exquisite colonial architectural masterpiece and this is where we ideally have our breakfast or light snacks.
Duration: 1 hour
Stop At: College Street (Boi Para), Kolkata (Calcutta) India
Enter the 'boi para' aka the education hub of Kolkata. Walk through the lanes of revolution where sparks of movement first ignited. Find the first edition of any book that you can name. It is said that if you don't find a book there it probably doesn't exist.Also we stop by at the most famous cafe of Kolkata, 'The Indian coffee house'.
Duration: 1 hour
Stop At: Hedua Park, Manicktala, Azad Hind Bag, Kolkata, West Bengal 700006, India
Walk through the traditional Bengali residency lanes a part of old Kolkata or as called in the olden days Calcutta. Find various buildings lost in time and people simply living their lives in serenity. A chance to taste lip-smacking street food and sweets.
Duration: 1 hour
Stop At: Hazra Crossing, Hazra, Kalighat, Kolkata, West Bengal 700026
Take a ride to the new Kolkata from the old Calcutta through the oldest underground metro in India.
Duration: 15 minutes
Stop At: Khidirpur, Kolkata, West Bengal, India
From the finest spots we move to one of the most unique and hush-hush part of Kolkata. Be prepared for a huge culture shock.
Duration: 30 minutes
Stop At: Maidan, Just south of B.B.D. Bagh to just north of Alipore and from the Hooghly River to J. L. Nehru Rd. and the shops of Park St., Kolkata (Calcutta) India
Entering the final destination, known to be the promenade of old calcutta and the centre point of modern Kolkata. Take a tram ride through the oldest tram line of India. Witness the culture of Kolkata as it is. Walk through the lush green fields and witness the summary of Kolkata.
Duration: 30 minutes