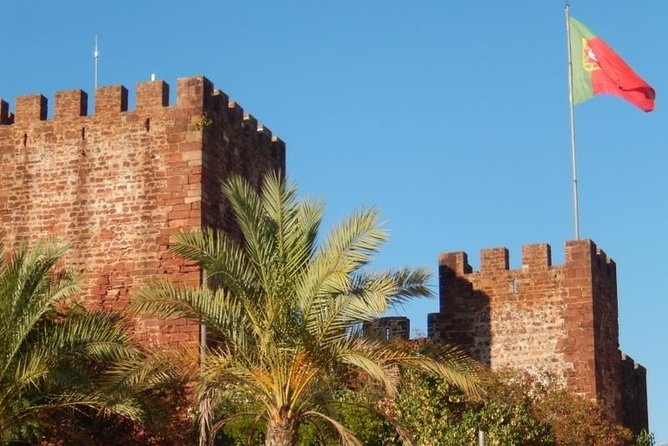 Wonder back in time to the era of the Portuguese Discoveries. Start in Silves, Algarve's first capital, and finish in Sagres, Europe's most southwest place.

Find secret places and special moments off the beaten path and discover the Algarve others do not know about!

Itinerary
This is a typical itinerary for this product
Stop At: Silves, Silves, Faro District, Algarve
We start our tour in Silves. The Moorish Shielb appears clustered around the castle which dominates the surrounding countryside. It is the Algarve city where the Islamic heritage is most striking. Here lived scholars and poets of the Al Garb (the West) of Al Andaluz, the powerful caliphate which dominated the Iberian peninsula for centuries. The gates of the city open on to the walls which, even today, guard the castle, whose battlements provide us with a kind of winged walk, with a view over the River Arade flowing lazily down below.
We cannot leave Silves without trying a morgado, one of the best recipes for this cake which is so typical of the Algarve Mountains.
It was from the bay of Lagos that the caravels set off on the great saga of the 16th century, in search of new worlds. The friendliness and welcoming nature of the people of Lagos are part of history: King D. Sebastio elevated it to the status of a city, after a journey to the Algarve in 1573, because he was so impressed by the warm welcome from the populace.
Finally we get to Sagres, the legendary promontory. In 350 A.D. it was described by the Roman Rufus Festus Avienos in the following way: the Cynete Cape, where the sidereal light goes down, emerges proudly as the extreme point of the rich Europe and goes into the salt water of the ocean, inhabited by monsters. There is then a promontory with frightening cliffs dedicated to Saturn. The choppy seas boil and the rocky coast stretches for a long way. Almost 22 centuries later the magic and imposingness continue.
In the fortress, the presence of Prince Henry the Navigator can be felt: this is where he dreamed up the magnificent epic of putting to sea and finding New Worlds.
Just a stone's throw away is the Cabo de S.Vicente, with its chapel, convent, fortress and lighthouse, the most south-westerly point in Portugal and in Europe.
Keen botanists, for their part, will find here several dozen plant species which are unique to this area, and, as Sagres is on the migratory route of a large number of birds, sometimes, given a bit of luck, you can watch their arrival or departure, a unique spectacle which can take several days.
Our Notes
The tour is private with your personal driver/guide. There will be no other people joining the tour.
To keep our tours private and comfortable we limit the groups with 7 people per guide.
The tour is done by car/minivan. We use cars (up to 4 people) or minivans (5 - 7 people).
During the tour we will make stops according to the itinerary.
Tour duration can be shortened upon your request.
We can also pick you up at diferent locations and hotels. Simply add to your booking an extra transfer.
Our guides will be happy to help you to buy souvenirs during the tour. It is strictly prohibited for our guides to take any commission from the shops.
Duration: 8 hours

During the tour we will make stops according to the itinerary.

Tour duration can be shortened upon your request.

Our guides will be happy to help you to buy souvenirs during the tour. It is strictly prohibited for our guides to take any commission from the shops.