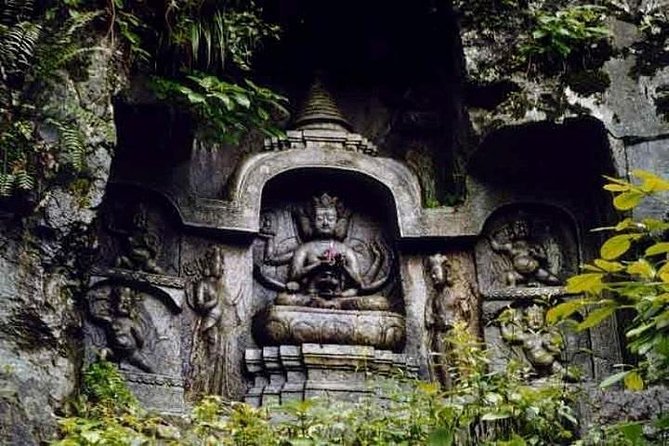 This day tour collects the essence of Hangzhou natural scenery and profound history for you. Visiting the landmarks - the West lake, Lingyin temple, Feilai peak (Feilai Feng), Hefang Street, tea village, you'll feast Hangzhou's color and fragrance and hence enjoy the elegant Hangzhou lifestyle. And the lunch will be served at the local farmer's restaurant for experiencing the real lifestyle in Hangzhou.

In the early morning, your private tour guide and driver will pick you up at your hotel lobby in Hangzhou or the Hangzhou railway station, and then set out on todays sightseeing in a comfortable, air-conditioning and private vehicle.

Firstly, spend the peaceful and less-crowded morning time to visit the iconic the picturesque West lake for a leisure cruise to enjoy the tranquil lake views as well as the ancient pagodas, traditional arched bridges, tree-lined walkways, beautiful hills, green islands and lush gardens. There are many lakes named "West lake" in China, but the "West lake" here in Hangzhou is considered the most beautiful among all and listed as UNESCO World Cultural Heritage. It is surrounded by hills on its three sides, with an area of about 6.5 square kilometers.

After the cruise, disembark the lake shore to stroll leisurely on the famous Su Causeway, and explore the poetic sites around, such as Three Ponds Mirroring the Moon, Fish Viewing at the Flower Pond (Huagang Park). The Huagang Park was a private garden of an official in the Southern Song Dynasty about 800 years ago. Now it has been greatly renovated and turned into large park of over 20 hectares.

Leave West Lake, and move on to next site Lingyin temple, about 3km west away from the West Lake. With a history of nearly 1700 year, Lingyin temple is hidden in the luxurious forest, and offers charming and peaceful landscape and impressive Buddhist culture. Next, extend your visit to the adjacent Feilai peak, also known as Peak Flying from Afar, which flew to China to spread Buddhism from India according to the legend. It features in uncountable Buddhist carvings lining the riverbanks and hillsides and tucked away inside grottoes.

After lunch at a local farmer's house, you are taken to Longjing tea Plantation to experience the traditional method of making Longjing (Dragon Well) Tea as well drinking, picking, smelling or buying. Hangzhou is famous for its Longjing tea, one of the best green teas in China.

At last, take an enjoyable walking at the famous Hefang Street, a unique pedestrian street full of ornate Chinese architectures, local delicious snacks and interesting handcrafts. Visit century-old Chinese pharmacy on the street - Hu Qing Yu Tang to appreciate the exquisite architecture as well as learn about the history and development of traditional Chinese medicines.

End your private tour with a drive back to your hotel or the Hangzhou railway station.