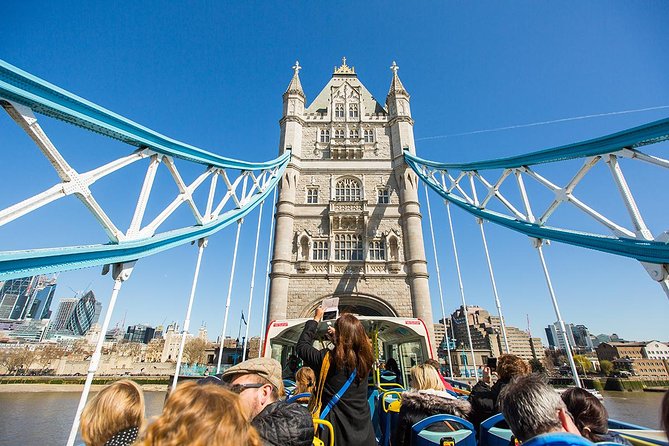 It's time to take in the panoramic views of London from the best open-top buses and unlimited hop-on, hop-off access! Book this Original Tour of London and explore the city as it meant to - at your own pace. You can hop on or off the buses at over 100 bus stops in central London, access free WiFi onboard, join the excellent free walking tours and enjoy a lovely free river cruise. As there are 7 different routes to explore with one single tour, you will have a lot to discover!

The original tour of London offers an array of attractions and activities to cover. You can choose from different popular points of interest as well as lesser-known gems according to your preferences.

Operates: Service operates daily every 20-30 minutes throughout the year.

Operates: Service operates daily every 30-60 minutes throughout the year.

Operates: Service operates daily every 30-60 minutes throughout the year.

Operates: Service operates daily every 20 minutes throughout the year. Operates only from 8am to 9am.

Check the itinerary section to know more about different tours and routes.

Tour – Yellow Route: Explore central London with live commentary. Stay on board for the full 2-hour loop, or hop on or off at any of the stops. The route includes all stops like Hyde Park, Baker Street, and Marble Arch mentioned on the Red Route except Madame Tussauds, London Planetarium, Regent’s Park, Oxford Street, and Regent Street. These attractions are replaced with the Ritz Hotel, Royal Academy of Arts and Fortnum and Mason.

The following complimentary activities are subject to availability on the day of your tour.

Thames River Sightseeing Cruise: Simply hop off your sightseeing bus at either Big Ben and the Houses of Parliament (Westminster Pier) or the Tower of London, and then walk the short distance to the pier. Show your hop-on-hop-off ticket and step aboard the boat to begin your river cruise. Take in spectacular city views from out on the deck or relax by the windows inside the boat as you glide up and down the Thames River, with top London attractions such as the London Eye, Tate Modern and St Paul’s Cathedral drifting slowly by.

Walking Tour – Changing of the Guard: Meet your guide at The Original London visitor center in Trafalgar Square at 10:30 am. Stroll past St James’s Palace on your way to Buckingham Palace, and then watch the time-honored Changing of the Guard ceremony taking place. In time to drumbeats, soldiers from the Queen’s Foot Guard march in front of the palace in their red tunics and bearskin hats.

Walking Tour – Rock ‘n’ Roll: Start at The Original London visitor center in Trafalgar Square at 1 pm then set off to explore the capital. Discover famous venues and sites linked to rock ‘n’ roll legends of the past few decades. See where the Beatles were nearly arrested, the venue of Jimi Hendrix’s last gig and more.

Walking Tour – Jack the Ripper: Leave the bus stop at the Tower of London at 3:30 pm with your guide and walk around Whitechapel in London’s East End. Follow the trail of London’s infamous serial killer, hear murderous tales from the city’s dim and dark past and see the places that gave the Ripper his notorious acclaim.

Infants must sit on laps.

Most travelers can participate.

Children under 16 years must be accompanied by an adult.

Hop-on, Hop-off Thames River cruise ticket is valid for the same period as your bus ticket only.