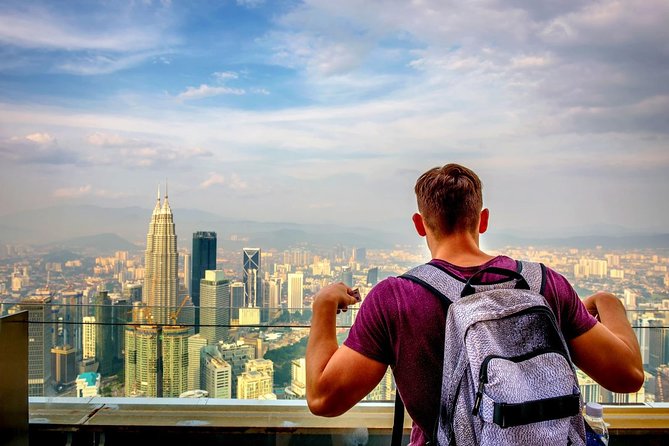 Kuala lumpur is a city filled with sitesof great historical and religious significance, as well as modern buildings with stunning architectural designs. This 8-hourtour includes admission to the Petronas Twin Towers Skybridge and Observation Deck. Glimpse 10prominent landmarks in all, such as Central Market, Batu caves, and the National monument.

This Kuala lumpur tour starts with hotel pickup in the morning or afternoon. During your visit to the Petronas twin towers, ride up to the observation deck, located about557 feet (170 meters) above ground, andtake unforgettable photoswhile you marvel at the cityscape from the Skybridge. Thenmove on to the Discovery Center to see an abundance of interactive scientific displays.

You'll find a range of magnificent architectural monuments, such asthe Old railway station. With its Moorish design, the building is a favorite photo spot for visitors. Proceed to theNational Mosque, another showcase of stunning architectural talent, with an exquisite blue-and-green tiled main dome. The Chinese Thean hou temple, built in the classic style of mainland China, is one of the oldest and greatest temples in Southeast Asia.

Venture onward to see Aquaria klcc, known as one of the biggest aquariums in Malaysia. Holding 5,000 marine organisms within millions of gallons of water, the sitecreates the sensationof being underwater. Next up is Independence Square, site of theNational Monument, followed by avisit toKuala Lumpur Tower, counted among the top 10 tallest towers in the world.

After exploring the city with your guide, relax in the depths of the Batu caves and observe its temples, shrines and ancient carvings. Finally, yourdriver will take you back to yourhotel in air-conditioned comfort.