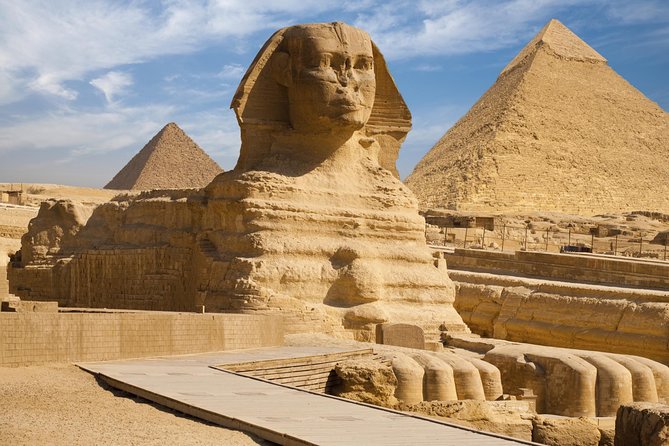 Three days excursion to Cairo from Marsa alam or Port ghalib. Enjoy Cairo highlights. On the First day You will visit Giza pyramids, The Sphinx overnight in Le Meridien in Pyramids view in room, On the second day you will visit the Egyptian Museum ,the citadel of Saladin, The Mosque of Mohamed Ali, Old Cairo, de Coptic Cairo the hanging Church and the old Bazaar Khan el Khalil, overnight in Le Meridien in Pyramids in view room on the Third day Fly to Marsa alam from Cairo ,Then transferred back to your hotel

Itinerary
Day 1: Marsa Alam- Giza
Stop At: Pyramids of Giza, Al Haram Str., Giza 12611 Egypt
You will be transferred from your hotel at 08:00 in Marsa Alam to Marsa Alam airport for flight to Cairo. The Flight departs at 09:55 and arrives in Cairo at 11: 20.
Upon arrival at Cairo airport you will be met by your private guide to visit :
Giza Pyramid Complex:
The complex includes three main pyramids, six little pyramids, the great sphinx and the Valley Temple. The complex dates back to the 4th dynasty 2400 years B.C.
The Great Pyramid:
It is the oldest and largest of the three pyramids of Giza plateau and the only one to remain intact from the 7 Wonders of the Ancient World. The height of the great pyramid is 147m, the number of stones used in construction is 2,300,000 and it took twenty years to be built.
The Great Sphinx:
It is the largest statue in the world, standing 73 m. long, 19 m. wide, and 20 m in height. It is the oldest known monumental sculpture.
The Valley Temple:
A Granite mortuary temple used by Ancient Egyptians for the mummification process and this is the only remaining one at Giza plateau.
Lunch will be served at the Pyramids/ Nile view restaurant, then move to visit:
Then transfer to 5* hotel
Duration: 6 hours
Meals included:
Lunch
Accommodation included: 5-star hotel
Day 2: Cairo - Old City
Stop At: The Museum of Egyptian Antiquities, Midan El Tahrir Geographical Society Building, Cairo 11511 Egypt
The museum displays a rare collection of 5000 years of art. Over 250,000 genuine artifacts are presented, including an exhibit dedicated to Tutankhamen collection of treasure, gold, and jewelry which was enclosed in his tomb for over 3,500 years.
Duration: 3 hours
Stop At: Mosque of Muhammad Ali, Al Abageyah Qism El-Khalifa, Cairo 11511 Egypt
Salah el-Din Citadel:
It served as Egypt's seat of government till the 1860s, Cairo Citadel is a magnificent fortress. It was constructed during Salah ad-Din reign. The construction work has started in 1176 and was completed in 1182. Then pay a visit to
Mohamed Ali Mosque:
It was constructed between 1830 and 1848, the mosque named " The Alabaster Mosque" because of most of the walls made out of pure alabaster. The mosque is a replica of the Blue Mosque in Istanbul
Duration: 4 hours
Stop At: Khan Al-Khalili, Cairo Egypt
No visit to Cairo is complete without a stop to Khan EL Khalili bazaar; one of the most famous and oldest bazaars in the Middle East.
Duration: 2 hours
Meals included:
Lunch
Accommodation included: s star hotel
Day 3: Cairo - Marsa Alam
Stop At: Marsa Alam, Marsa Alam, Red Sea and Sinai
You will be transferred from your hotel at 05:00 in Cairo to Cairo airport for flight to Marsa Alam. The Flight departs at 07:00 and arrives at Hurghada at 08: 15, Then you will be transferred to your hotel in Marsa Alam.