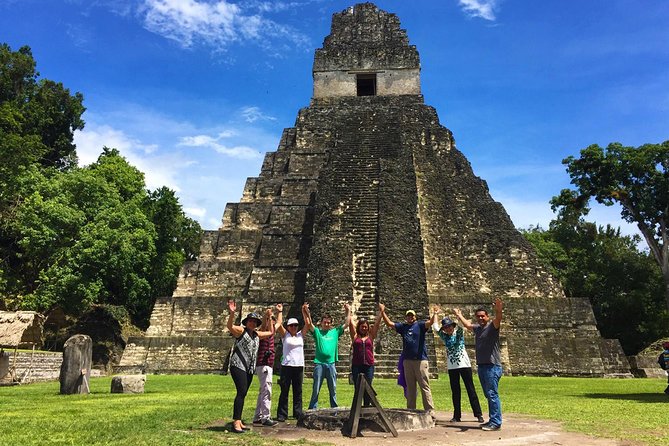 Discover one of Maya's most incredible architectural site. Tikal has been of the main political center during the precolonial era and is a must see while traveling through Guatemala.

You will be picked up at your hotel in Guatemala City and transferred to Guatemala International Airport - La Aurora, to take your flight to Flores.

Upon arrival at Mundo Maya Airport, you will then be transferred to Tikal archaeological site. During this tour you will have the opportunity to walk through the jungle and admire the many species of local flora and fauna. Here, discover the impressive splendor of Tikal, which means place of voices. The park, declared a World Heritage Site by UNESCO in 1979, spans 576km squared. In addition to the main temples and plazas, there are several sites not to miss.

The Major Plaza is the Archaeological Park of Tikal, surrounded by impressive buildings such as Temples I and II, called the North and Central Acropolis. Also, there is a range of wakes and altars that play a part of the dynamic history of the Mayan Civilization in Tikal. At the end of the tour a traditional lunch will be served.

The Temple of the Grand Jaguar (Temple I) and the Temple of the Masks (Temple II) loom like a pair of colossal bookends on opposite sides of the Great Plaza, a vast expanse ringed by terraces, palaces and ball courts.

Temple I rise some 50 meters above the plaza's eastern end. A stone stairway leads up the pyramid's nine tiers, corresponding to the nine levels of the Mayan underworld.

The central part of the ancient city alone contains 3,000 buildings and covers about 16 square kilometers. Tikal is also part of the one-million-hectare Maya Biosphere Reserve created in 1990 to protect the dense forests of the Petn.

At the end of our adventure through the jungle we will have time for lunch (Included).

In the afternoon, you will return to Airport Mundo Maya in Flores to take a flight back to Guatemala City. Upon arrival in Guatemala City, you will then be transferred back to your hotel.

Roundtrip Flight from Guatemala City to Flores by TAG or Avianca

The listed price does not include a $3 per person departure tax, payable at the time of tour check-in. The departure tax is required by our local supplier and/or the local transit or governing authority and is not within our control.

At the time of purchase is an essential requirement to book the air ticket for each passenger: Passport first name and last name,Birth date, Nationality, Passport Number, Gender, is required at time of booking for all participants.

May be operated by a multi-lingual guide (english and spanish)

Take into consideration that your transfer from the Airport to your hotel after the flight back from Flores its sharing with other passengers, so if the airline arrives early at the scheduled arrival time of your flight, you must wait at the airport until our staff arrives to pick you up.