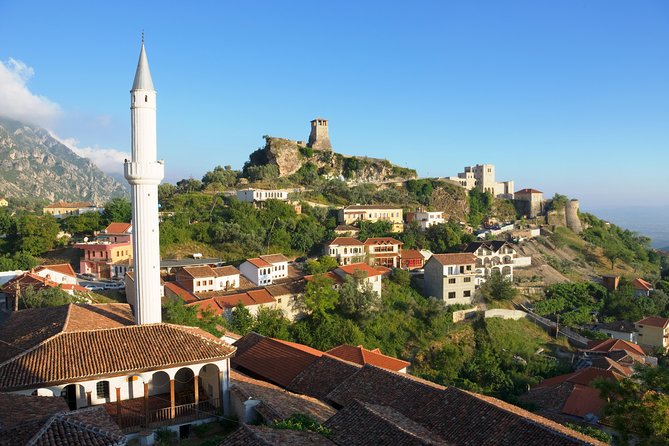 Take a chance to get to know two beautiful cities in Albania: Kruje and Tirana. Kruje provides to the visitors the great view of majestic landscape and a rich collection of historical and cultural objects. While Tirana, being the capital has something to offer for everyone.

Meet with the group and leave Tirana at 9:30 am. You will be driven towards the historical town of Kruja.   Kruja is located 32 km northwest of Durres and 45 minutes by car from Tirana. Kruja rises on the slopes of Sari - Salltiku Mountain. It provides to the visitors the great view of majestic landscape and a rich collection of historical and cultural objects. The most important is the castle of Kruja, which was built during the 5th and 6th centuries. The surrounding walls are reinforced by nine towers, which served as an observation and signaling post during times of war. Within the walls of the castle there can still be found the remains of a few houses.   Start your walking tour of Kruje, through the narrow streets of the medieval well preserved Old Bazaar. Once inside the city walls you will visit the fortress, the Ethnographic Museum, the Museum of George Kastriot Skanderbeg, the Albanian National Hero.   Time for lunch in a traditional restaurant where you will enjoy delicious food.   Return to Tirana. Tirana became capital of Albania in 1920 and is the largest city of Albania. Your tour starts from the Main Boulevard at Skenderbeg Square. Here you can visit the National theater, Skanderbeg Statue (dedicated to the National Hero), Historic Museum, Cultural Palace, Et’hem Bey Mosque, Clock Tower and going through the Boulevard to the Pyramid, built in 1988 as a museum for Enver Hoxha, dictator of the period.   End of service.

City Tour of Tirane and Kruje