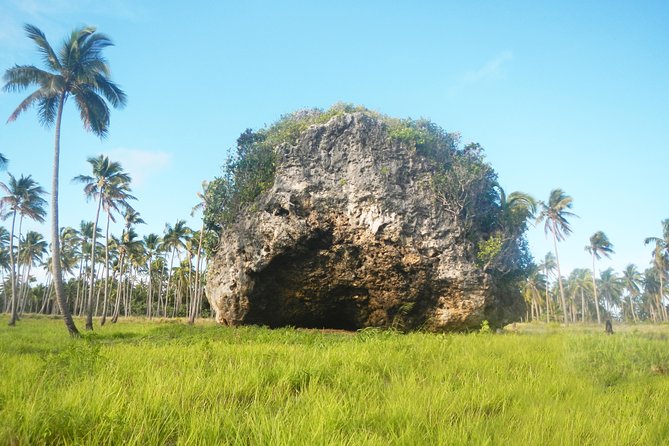 It is your chance to learn the unique sights ofWestern side in Tongatapu, where you will visit the lovely sandy beaches and the historical sites. You will see the Royal Palace and Tombs, the Villa, Three headed coconut tree, the Flying foxes and of course spectacular blowholes.

You will be picked up from your hotel at approximately 10am to begin your western island tour. Enjoy the idyllic lifestyle of the locals as you pass through the fruit plantation and villages.

The first stop will be at Royal Palace, a wooden Palace, it is built in 1867 and is the iconic feature of Nukualofa. Next stop is the Royal Tomb, only a short distance from the Royal Palace. Visit the Talamahu Market and Langafonua Handicrafts Centre and be amazed with the wide range of traditional Tongan handicrafts such as tapa cloth and tapa crafts, woven crafts from Pandanus leaves, Tongan jewellery and wood carvings.

Along the way to the spectacular Blowholes, a brief stop will be made to take a photo of the bizarre three headed coconut tree. Driving up into the west side, you will see the Tsunami Rock which also known as Maka Sioata, a giant three-story boulder which was suspected to be the largest object moved uphill by a tsunami. Your last stop is the place where the first European Explorer first landed in the Kingdom of Tonga, the Abel Tasman Landing Place.

Lunch time is flexible between stopover points either at the Western side or the Eastern side and arrangement can be arrange for a resort, beach but will depend on the tourist favour.

After the completion of your scenic tour, you will be taken back to where you are staying.

Come now, take a chance to experience Tonga and its Friendly people.