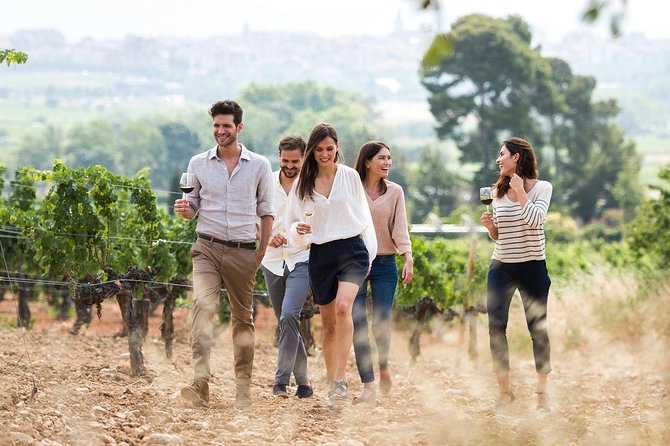 Start your half day trip from Barcelona in a comfortable bus towards the mountain of Montserrat, the peculiar aspect of Montserrat's rock formations offers one of the most special landscapes of Catalonia.After Montserrat, you will drive to the TorresWines Cellar to learn the secrets of wine with one of the most important wineries. You willalso learn more about the viticulture through a five-sense experience. Complete your day with the fantastic visit to Sitges, one of the most beautiful villages of the Catalonia coast.

Start your half day trip from Barcelona in a comfortable bus towards the mountain of Montserrat. Montserrat is a rocky mountain located 50 km to the southwest of Barcelona. The main monastery stands at 720 meters above sea level. Nowadays there is a community of 80 monks that live there and follow the rule of Saint Benedict.
During the first part of the tour the guide will give you an introduction to the history of the monastery and the mountain. Once the guided tour has ended, you will have free time to enjoy de fabulous land scape by yourself, to visit the local food market, to visit de audiovisual exhibition and to taste some typical liqueurs.

This visit starts with a commented tasting of two wines and a full local appetizer-brunch. Later we will visit the vineyards and the winery, where we will see the new space where the iconic wine of the family is made: Mas La Plana. In addition, the visitor has the opportunity to access the Waltraud winery and the area used for the maturation of the most emblematic Torres wines.

Sitges is one of the most beautiful villages of the Catalonia coast. This sailor village is one of the favorite destinations of the tourists that visit Catalonia, because its picturesque old town center with narrow streets, beautiful beaches, a vibrant cultural live, good food, nice and unique shops. You will visit its streets with our guide who will explain you historic details about the Indianos, that people who went to America in search of a better life. After the guided tour you will be free to continue discovering the corners of the city, its magnificent beaches or go shopping in the old town.

Taste of 4 typical liquors. Handmade by the monks of the monastery.

Appetizer-brunch consisting of coca bread with tomato and local cold meat and cheese.

Food and drinks, unless specified.

A dress code is required to enter the Basilica at Montserrat. It is not permitted to enter with tank tops, strapless shirts, short shorts or sandals.

At Montserrat there is a mountains climate, depending on the season you will need clothes protecting you from the rain and/or cold.

Please be aware that some walking is included during this tour, please come prepared and we recommend wearing comfortable clothes and shoes.

Please remember to request a change in the usual menu due to food intolerances or other reason when making your reservation and wait for the answer. If you do not notify us in advance, the company is not responsible for not being able to serve you an alternative menu.

For your comfort, a radio guide system is offered during the tour, in groups of more than 5 people.