Tour Around The City Arequipa In Bus

Tour Around The City Arequipa In Bus 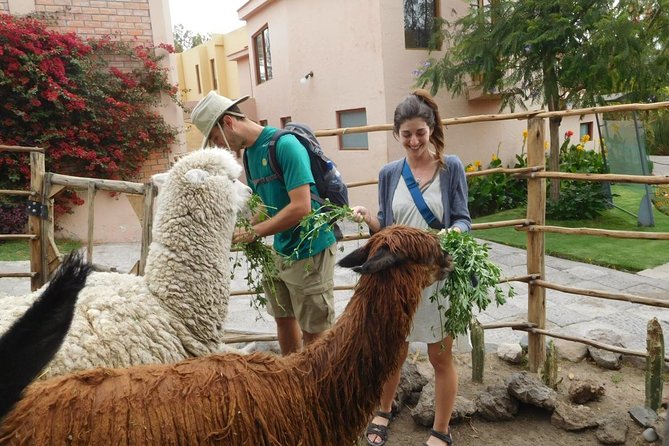 For this tour we will take a panoramic bus tour whose visits will be the Plaza de armas, the Mirador de Carmen alto, Plaza and Mirador de Carmen Alto, Yanahuara Mirador Church and Plaza, Outcal Incalpaca and zoo, Sachaca District, Tingo Spa, via Landscaper, Mansion of the Founder, Stone Mill in Sabandia and Andenera de Paucarpata. During this trip you will appreciate the scenic splendor that Arequipa has. Making short stops at 5 main points where you can walk around.

Itinerary
This is a typical itinerary for this product
Stop At: La Mansion del Fundador, San Juan de Dios 206-A Carretera Paisajista s/n Huasacache, Hunter, Arequipa Peru
It is a house that was built in the sixteenth century, next to the Socabaya River and also has an area of extensive crops, which were important at the time. After living the son of the founder of the city, it is a farm that was sold to the Jesuit parents and they were the ones who built the chapel in these lands and you can see the image of San Francisco Javier, passing to Don Juan Crisstomo de Goyoneche from 1785.
Duration: 20 minutes
Stop At: Molino de Sabandia, Camino Al Molino S/N. Sabandia, Arequipa 04000 Peru
It is surrounded by centuries-old trees, has a beautiful waterfall, whose force moves the heavy stones to grind.
You can also see a beautiful collection of cacti and succulents, various local flowers and plants.
A great bull fighting Arequipeo, vicuas, llamas, alpacas, guinea pigs, roosters and other birds representative of the area.
Duration: 30 minutes
Stop At: Incalpaca, Calle Condor 100, Arequipa Peru
Very good amount of top quality clothes and offers quite
A small zoo of alpacas, llamas, vicuas. (South American camelids)
Duration: 20 minutes
Stop At: Yanahuara, Suburb of Arequipa, Arequipa Peru
traditional viewpoint of arequipa and one of the oldest neighborhoods in the city.
Duration: 25 minutes
Stop At: Mirador Carmen Alto, Arequipa Peru
BEAUTIFUL VIEW OF THE CITY WHERE YOU APPRECIATE THE MAIN ANDENES OF THE CITY OF AREQUIPA
Duration: 25 minutes