Tour Of The Port Of Callao And Fort Real Felipe - Cajamarca

Tour Of The Port Of Callao And Fort Real Felipe - Cajamarca 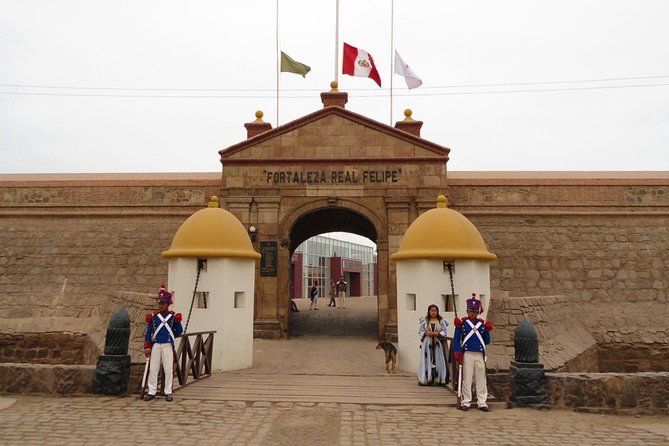 The Fortress of the Real Felipe is located in the bay of Callao, the viceroy Jose Antonio Manso de Velasco orders to build all this immense Fortress taking advantage of the stay of three experts in fortification as they were the French Luis Godin and the Spaniards Joseph Amich and Juan Francisco Rossa. The construction of the fortress began on August 1, 1747, and the first stone was placed in the Torreon de la Reina, and was completed in 1774. This fortress has a size of 70000 m2, El Real Felipe is a site museum And has the shape of an irregular pentagon, its towers called King, Queen, San Felipe, San Carlos and San Jos. Only the bastions of the King and Queen have towers called knights. The Real Felpe fully fulfilled his role of gendarme and defender of the coasts. I stand firm on the threats and attacks of the most famous and feared pirates and corsairs of the time and then, was the scene of events that marked the course of the history of Peru and America.

The visit to the Real Felipe is done in approximately 1 hour and a half, by the places of the circuit of scheduled visit, which is done with guides of the own institution. It is considered a rest of 10 to 15 minutes. In fact, if one wishes to know the whole museum in detail, it may take a couple of full days. The museum is open from Tuesday to Sunday from 10 AM to 2 PM.
This the Real Felipe a base of the Peruvian Army is for this reason that the guides will be of the same museum, after visiting the fort we will visit a beautiful coastal district called the Punta, from there we will be able to see the San Lorenzo islands and we will be able to take very Beautiful photos, and on the way back we will pass through the central part of the callao to see beautiful streets and old mansions and beautiful murals made by young artists, we are sure that this walk you will enjoy it, we will include the tickets, transfers and the guide.