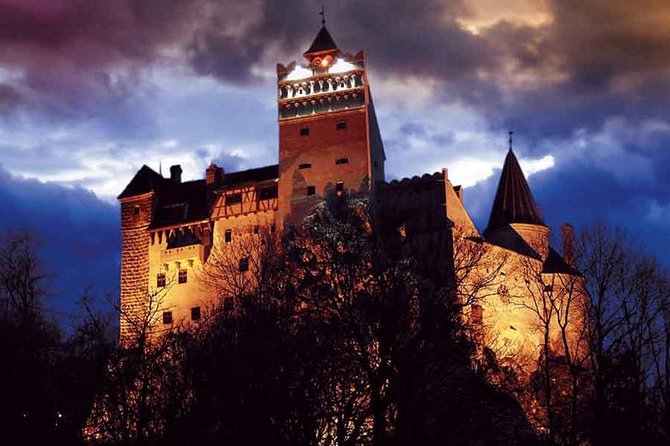 As you explore Transylvania with this exciting tour, you will understand why it is one of the most popular places in the world for the legends and mysteries. On this guided day trip from Bucharest, you will discover the charm of the Castles of Transylvania: Peles castle and Dracula's Castle (Bran Castle) and the wonderful medieval city of Brasov. Taking this tour, where transport is included, will be the highlight of your Romanian trip!

Be picked up from your hotel in the morning and take the road to Sinaia to visit the Peles Castle, a former summer residence of the Romanian kings, in Sinaia, a well-known mountain resort as well.

Nowadays, the Castle is one of the most important museums in Transylvania where one can admire furniture and ornamental objects, carpets, tapestry, sculptures, paintings, weapons collections from the 15th up to the 19th centuries.

The journey continues to Bran with its famous Bran castle, also called 'Dracula`s Castle', situated not far from Brasov (25 kilometers) at the entrance in the Bran Rucar passage. The castle got its fame from Dracula`s legend written in 1897 by Bram Stoker and later on turned into a film made by Francis Ford Coppola.

Then, take a short tour of Brasov City. Dating from 1520, the city council Square has been considered the center of Brasov for hundreds of years. Merchants and craftsmen fairs took place here. They came from Transylvania, Wallachia, and even the near East and Europe. The square is surrounded by houses built in the Renaissance, Baroque, Provincial and Neo-classic style.

The medieval fortress of Brasov was one of the most secure fortresses in Europe, the architectural defense pile being made of stone walls, 32 defense towers, 8 bulwarks, and 4 fortified gates. The towers had both defense and observation roles. During the tour, you can see the old wall which is still preserved, as well as Black and White Towers.

Also included is a visit to the weaver's Bastion, the biggest and best-preserved bastion. Ecaterina's Gatesituated near the Schei Gate in the western part of the Fortress was built in 1559 in the Renaissance style. It has a sharp tower and four little towers, symbolizing the medieval right of life and death over the vassal's lives.

Return to Bucharest and be dropped off at your hotel.

Tips for the tour guide and driver

For a child under 7 years old, we advise you to take a private tour

We pick up also from other hotels or apartments. Please indicate the address and we will contact you the day before the tour starts to let you know the closest pick-up point if we can't pick you up from your address. In any case, it will not be further than 500-600 m.