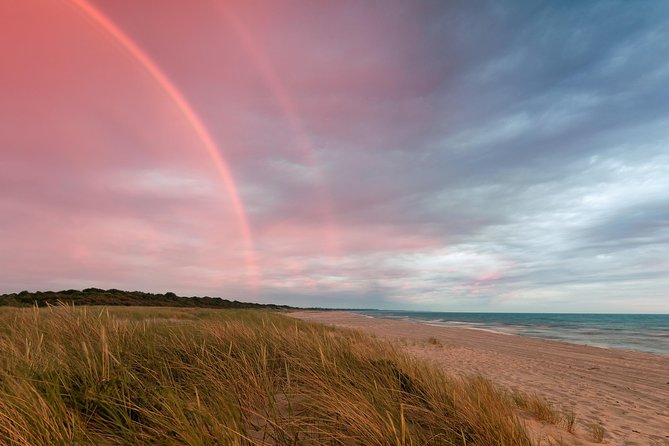 You may always set the pace of the tour and according to your desire a trip to the Curonian spit can easily turn into a leisurely walk in the very heart of this appealing piece of Baltic nature. Every guest will feel the magic of the Curonian spit at seeing the sea splashing among the dazzling sands. We will go up to the observation deck "The Height of Efa", that is known for its breathtaking view of the snow-white dunes, pine forest and the immense seashore. During the excursion we will walk through the Dancing Forest - the place where pine trees bizarrely and fantastically curve as if they are alive beings. Our guides will reveal not only the secrets of the amazing trees, that enrapture people from all over the world but will also tell you about the legendary German glider school that functioned at that places at the times of Kenigsberg.

Itinerary
This is a typical itinerary for this product
Stop At: Fringilla, Kurshskaya kosa 23 km, 1, Zelenogradsk Russia
The field hospital is a division of the world's first ornithological station, founded in Rossitten (now the village of Rybachy) back in 1901, Professor I. Tinneman. The hospital received its name in honor of the finch bird (in Latin Fringilla), located on the path of seasonal migrations of various birds.
Duration: 30 minutes
Stop At: Museum of Russian Superstitions, Kurshskaya Kosa, 14th km, Lesnoy Russia
The Museum of Russian Superstitions, located in the Kaliningrad Region of the Russian Federation, is dedicated to Russian folklore: the spirits of the Slavs, characters of fairy tales and various folk beliefs.
Duration: 1 hour
Stop At: Rybachy, Rybachy, Zelenogradsky District, Kaliningrad Oblast, Northwestern District
A Teutonic Ordensburg on the road from Knigsberg to Memel was first mentioned in 1372. It had been the site of a Curonian fishing village, named after Old Prussian rosit ("dew", cf. Lithuanian: Rasa). Constantly threatened by coastal dunes the settlement had to be relocated several times until their migration was stopped by large-scale afforestation in the 19th century.
The Curonian Spit became part of the Duchy of Prussia in 1525 and since 1871 belonged to Germany until the end of World War II. In the 1920s, the dunes near the village with their updraft was a popular venue for glider pilots like Julius Hatry. In 1924 the local gliding school became part of the Rhn-Rossitten Gesellschaft, predecessor of the Deutsche Forschungsanstalt fr Segelflug (German Research Institute for Sailplane Flight). The area was also known as an elk habitat. In the 1930s it developed to a resort town.
It was transferred, along with the rest of northern East Prussia, to the Soviet Union in the aftermath of the war. Rybachy translates as "Fishers' (settlement)", and appropriately employment centers on the fishing boats which dock at the pier on the Curonian Lagoon . The former Rossitten Bird Observatory (1901-1944) is today the site of the Rybachy Biological Station, founded in 1956 by Lev Belopolsky, which continues research on bird migration.
Duration: 1 hour
Stop At: Dancing Forest, Curonian Spit, Rybachy Russia
Dancing Forest - is a pine forest on the Curonian Spit in Kaliningrad Oblast, Russia noted for its unusually twisted trees. Unlike drunken forests, the trees in the Dancing Forest are twisted into several patterns, such as rings, hearts and convoluted spirals bending to the ground.The exact cause of the trees' distortion is unknown.
Duration: 1 hour
Stop At: Vysota Efa, Curonian Spit, Morskoye Russia
A 2.8 km route was laid along 42 km of the Curonian Spit in the vicinity of the village of Morskoye, the most picturesque of all the villages of the spit. He will lead you to the Orekhova Dune (Petsch), the highest point of which (55 m) was named the height of Ef in honor of arborist Franz Wilhelm Ef, whose activity was devoted to the study and fixing of moving sands. The sand dunes of the Curonian Spit are among the highest in Europe. From the observation platforms, you will discover all the splendor of the spit landscapes: the sea, the bay, open white dunes, moving sands, forest spaces, cozy houses of the village of Morskoye
Duration: 30 minutes
Stop At: Curonian Spit, 98 Km peninsula Nationalpark KursiU Nerija Klaipda - Lesnoje, Kaliningrad 238535 Russia
Curonian Spit is a 98 km long, thin, curved sand-dune spit that separates the Curonian Lagoon from the Baltic Sea coast. Its southern portion lies within Kaliningrad Oblast, Russia and its northern within southwestern Lithuania. It is a UNESCO World Heritage Site shared by the two countries.
Duration: 5 hours