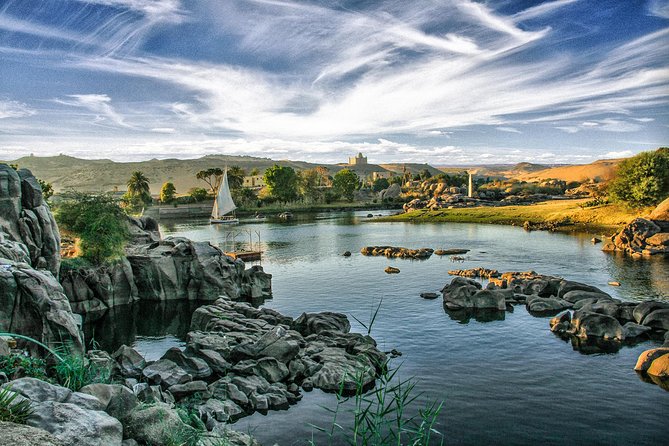 Itinerary
Day 1: day tour in aswan
Pass By: Aswan High Dam, Manteqet As Sad Al Aali, Aswan Egypt
It has been erected by the Egyptian president Gamal Abdel Nasser in 1960 AD to protect Egypt from the Nile flood.
Pass By: Temple of Philae, Island of Agilika, Aswan Egypt
It was erected during the Graeco-Roman period and was dedicated to goddess Isis.
Pass By: Unfinished Obelisk, Sheyakhah Oula, Aswan Egypt
It was made out of red granite and was dedicated to god Amun Ra.
Pass By: Aswan Botanical Garden, Sheyakhah Oula, Aswan Egypt
ail on a felucca to the Botanic Gardens on Kitchener Island .Enjoy the peace and tranquility of the island and the freedom of setting your own itinerary with the luxury of a private tour.Your felucca ride to Kitchener Island takes around 20 minutes, depending on wind speed and Nile currents, and on arrival your guide will accompany you to Aswan Botanic Gardens. Visit the small botanical museum before strolling through the tranquil gardens which are home to many exotic species of plants and trees imported from all around the world.
Meals included:
Lunch
No accommodation included on this day.
Day 2: Abo simble
Pass By: Abu Simbel Temple Complex, Abu Simbel, Abu Simbel Egypt
It lies south of Aswan on the western bank of the Nile, 180 miles south of the First Cataract in what was Nubia. The site was known as Meha in ancient times and was first documented in the 18th Dynasty, when Ay and Horemheb had rock-cut chapels hewn in the hills to the south. Upon arrival, you will proceed to visit Abu Simbel Temples, which were built by the well-known king Ramses II. The biggest temple was called as the Great temple. It was built by Ramesses II and being dedicated to the famous god Rahorakhty. While the smaller temple and it was dedicated to king Ramesses II himself and his beautiful wife queen Nefertari.
Meals included:
Lunch
No accommodation included on this day.