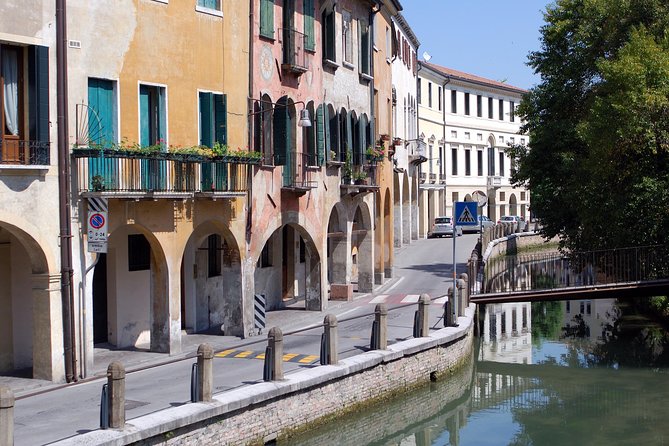 Join this private tour of Treviso and experience the authentic Veneto life away from the tourist crowds. This mid-sized city will enchant you with its medieval city walls, its pretty canals, narrow cobbled streets and beautiful frescoed churches.

During this 2.5-hour private tour your expert guide will take you through the most important and interesting sports in the beautiful city Treviso.

Although still far from most of the touristic flows, this mid-sized city of the Veneto region is truly beautiful and represents a hidden gem of the North-East of Italy. You will be fascinated by its picturesque canals and bridges, its lively historical center, bars and restaurants, and by the relaxed atmosphere that you can breath through its pretty streets.

Follow your guide along Riviera Santa Margherita, on the River Sile, and spot the so called "Bridge of the Impossible", due to the many problems faced during its construction. Get to see theDante's Bridge, with the stele erected for the sixth centenary of Dante Alighieri's birth, and theLoggia dei Cavalieri, covered with a rich decoration recently restored. Walk to Piazza dei signori, the nerve center of Treviso where local people love to meet.

After that, you will head towards the "Fountain of Tits", built in 1559 after a period of heavy drought that struck Treviso (ask your guide the reason of that name!). Next stop will be the outside theChurch of St. Francis, built by Pope Innocent III, then you will see Piazza Rinaldiand theBuranelli Canal before arriving to theTreviso Cathedral, seat of the local diocese.

At the end of the tour, you will find yourself back in Piazza dei signori.

One final tip: you might want to bring along your camera!

The tour will take place even when it's raining. In the event of an exceptionally heavy rain the tour may be cancelled and you will be given a full refund