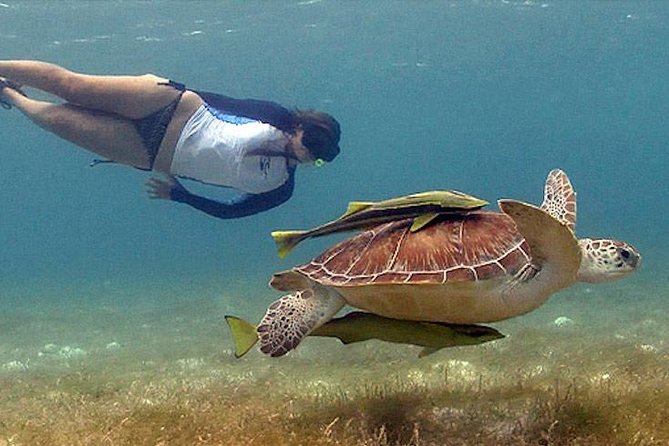 This tour combines two amazing activities. First, you'll step back in time and discover the Tulum Mayan ruins. Later, you will swim in an area known for marine turtles and a variety of multicolored fishes into the natural beauty of the Akumal Bay.

You will be picked up from your hotel and start an unforgettable adventure journey. The first stop will be Tulum. At this place, you will be accompanied by a specialized bilingual tour guide. You will be transported back to the Pre-hispanic times while listening to the history of this great ancient Mayan City and its importance within the Mayan culture. Tulum is a walled city where, besides of having one of the most stunning turquoise-blue water Oceanfront view, it shares its natural and cultural treasures alongside the second largest Coral Reef in the World.

Then, you will go to the next stop which is the beautiful Akumal Bay, which means "The Place of the Turtles" in Mayan. Located around 25 minutes from Tulum, this place offers a world-class snorkeling experience. Akumal is a natural protected area that hides into its warm turquoise-blue waters an amazing and immense underwater world such as: multi-colored fish species, natural sinkholes with crystal clear water, underground caverns and rivers, lagoons and of course, the home of this fascinating marine turtles. You can swim in an area known for marine turtles and learn how to care of them.

Then, you will also enjoy a exquisite Mexican lunch in one of the best Akumal Restaurants. You will head back to your hotel after this, ending a great experience with nature and culture.

Snorkeling at the coral reef