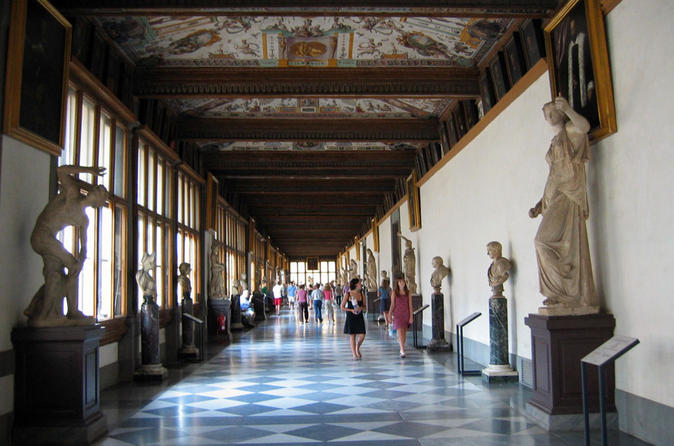 Skip the long lines and tour the Uffizi Gallery with a monolingual guide. See famous paintings by some of the most famous artists from the Middle Ages to the Renaissance. Throughout your tour of this prominent museum, your guide will share insights into the artists and their craft, technique and tools.

Start your day in Montecatini and meet our driver with shuttle service to Florence. Upon arrival at 9:00 there is a walking tour of Florence (1h30min) to to give you and introduction of Florence with our guide that will tell interesting anecdotes and history of Florence.
After, youll have some free time and in the early afternoon youll have the guided tour of the museum. The Uffizi Gallery is one of the most famous museums in the world, and it is housed in the former uffizi or offices of the Medici Family. Your knowledgeable guide will tell you about the works of the greatest artists from the Middle Ages to the Renaissance: Cimabue, Giotto, Botticelli, Leonardo da Vinci, Michelangelo, Raphael, Titian, and many more. You will recognize original world-famous paintings you have seen in books, magazines, and on TV close-ups.
You will learn about the secrets of the artists craft, techniques and tools. Looking at the most famous artworks of the period, you will be able to understand why Florence was the birthplace of the Renaissance.

Personalize your museum experience. There is no need to rush off at the end of the tour. You may stay inside the museum until closing time and you have free time before the shuttle to go back to Montecatini.

shuttle service to and from Montecatini

Entrance to the Uffizi Gallery Museum and visit with monolingual guide

Earphones for groups of more than 15 participants

Customers must be able to climb and descend stairs

07:30 am: shuttle from Montecatini, Piazza Italia (Check point Bus, near the train station) to Florence

9:00 pm: shuttle from Florence, Stazione Leopolda: Viale Fratelli Rosselli at the corner with Via Elio Gabbuggiani to Montecatini

The Uffizi tour lasts 2 hour, Then customers can enjoy some free time in Florence (without the guide)