Uluru Sunrise And Guided Base Walk - With Reviews & Ratings

Uluru Sunrise And Guided Base Walk 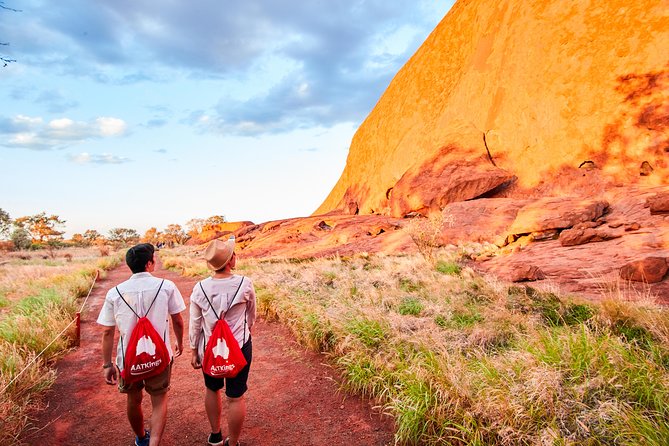 Enjoy a magical morning walking around the base of Uluru, watching the first sunlight of the day creep across the desert plains, slowly changing the color of your surroundings. This walk is 6.5-miles (11-kilometers) in length.

Rise early to travel to the base of Uluru. Here you will receive your breakfast, accompanied by your guide, commence your base walk of Uluru as sunrise approaches.

First walk from Kuniya Piti, an Uluru sacred site and hear the Tjukurpa (Anangu the local Aboriginal people - beliefs and law) story of the Mala Men. Next is the Mala Walk, one of the most important habitation areas for the local Aboriginal people over thousands of years. The Mala walk includes a visit into Kantju Gorge, where after rainfall, water can cascade over the side of Uluru and plunge some 90-metres. From here, you are then on to the base of the climb point. After a short rest break, continue on along the Lungkata Walk where your guide will tell you the Tjukurpa story of the cheeky Blue Tongue Lizard!

Next stop is the Mutitjulu Waterhole. Your guide will indicate the natural features of the landscape, Aboriginal rock paintings and relay more traditional stories relating to this special place. The waterhole was once an important water source for the Anangu people. Your last section to complete your base walk is back to Kuniya Piti where you will board your coach back into town and receive a certificate of your achievement!

Please ensure you have a minimum of 1.5 litres of water with you for your walk.

A good level of fitness is required for this tour.

Please ensure you have a minimum of 1.5 litres of water with you for your walk.

This tour finishes at approximately 1300 and therefore it may not return to Ayers Rock Resort in time to meet airport transfers and flights on this day.