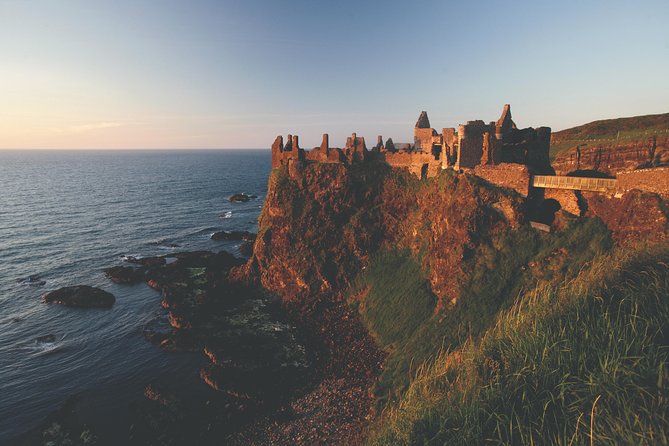 An unrivalled tour that will be the highlight of your tour expeditions.Admiral Chauffeurs provide exclusive award-winning tours and we are the chosen form of transport for various Game of Thrones stars due to our exceptional service.

Itinerary
This is a typical itinerary for this product
Stop At: The Dark Hedges, off Bregagh Road, Ballymoney Northern Ireland
Dark Hedges-It was intended as a compelling landscape feature to impress visitors as they approached the entrance to their Georgian mansion, Gracehill House. Two centuries later, the trees remain a magnificent sight and have become one of the most photographed natural phenomena in Northern Ireland. In fact, the iconic trees have been used as a filming location in HBO's epic series Game of Thrones, representing the Kingsroad.
Featured Scene: Season 2, Episode 1: The North Remembers - On the King's Road, Arya Stark has escaped from Kings Landing, disguised as a boy. She is with Yoren, Gendry, Hot Pie and others who are to join the Nights Watch, in a cart, travelling north on the Kingsroad.

Duration: 40 minutes
Stop At: Bushmills Distillery, 2 Distillery Road, Bushmills BT57 8XH Northern Ireland
In 1788 Bushmills had five licensed distilleries. Today the Old Bushmills Distillery is a major tourist attraction. You can visit the distillery, taking various tours to experience how the world's most famous whiskey is made!
The current building is from the Victorian era, built in the late 1800's.

Duration: 1 hour
Stop At: Dunluce Castle, 87 Dunluce Road Co. Antrim, Portrush BT57 8UY Northern Ireland
The iconic ruin of Dunluce Castle bears witness to a long and tumultuous history. First built on the dramatic coastal cliffs of north County Antrim by the MacQuillan family around 1500, the earliest written record of the castle was in 1513.
It was seized by the ambitious MacDonnell clan in the 1550's, who set about stamping their mark on the castle under the leadership of the famous warrior chieftain Sorely Boy MacDonnell during an era of violence, intrigue and rebellion.
In the 17th century Dunluce was the seat of the earls of County Antrim and saw the establishment of a small town in 1608. Visitors can explore the findings of archaeological digs within the cobbled streets and stone merchants houses of the long-abandoned Dunluce Town.
The dramatic history of Dunluce is matched by tales of a banshee and how the castle kitchens fell into the sea one stormy night in 1639.

Duration: 1 hour
Stop At: Giant's Causeway, Causeway Road, Bushmills BT57 8SU Northern Ireland
Giants Causeway, renowned for its polygonal columns of layered basalt, is the only World Heritage Site in N Ireland. Resulting from a volcanic eruption 60 million years ago, this is the focal point for a designated Area of Outstanding Natural Beauty and has attracted visitors for centuries. It harbours a wealth of local and natural history. Other noteworthy items include: a Spanish Armada shipwreck site (La Girona) & many traces of the legendary giant Finn MacCool.
Duration: 1 hour
Stop At: White Park Bay, 152 Whitepark Road, Ballintoy BT54 6NH Northern Ireland
The spectacular sandy beach forms a white arc between two headlands on the North Antrim coast. In this secluded location, even on a busy day there is plenty of room for quiet relaxation. The beach is backed by ancient dunes that provide a range of rich habitats for bird and animal life.

Duration: 30 minutes
Stop At: Ballycastle Harbour, 14 Bayview Road, Ballycastle BT54 6BT Northern Ireland
Ballintoy Harbour can be discovered in the picturesque village of Ballintoy. Known as a raised beach, it is located alongside the B15 coast road, 17 miles north-east of Coleraine and five miles west of Ballycastle
Duration: 30 minutes
Stop At: Carrick-A-Rede Rope Bridge, 119A Whitepark Road, Ballintoy BT54 6LS Northern Ireland
- Connected to the cliffs by a rope bridge across the Atlantic Ocean, Carrick-a-Rede Island (home to a single building - a fisherman's cottage) is the final destination.
Suspended almost 100 ft (30 m) above sea level, the rope bridge was first erected by salmon fisherman 350 years ago.

Duration: 40 minutes
Stop At: Belfast, Belfast, Northern Ireland
Throughout the 20th century, Northern Ireland has had a complicated political history. While the region is vibrant and peaceful today, just over 40 years ago, Belfast was a city in civil war. To learn more about this period of history, wander the streets to take in the sights of colourful murals depicting this time.