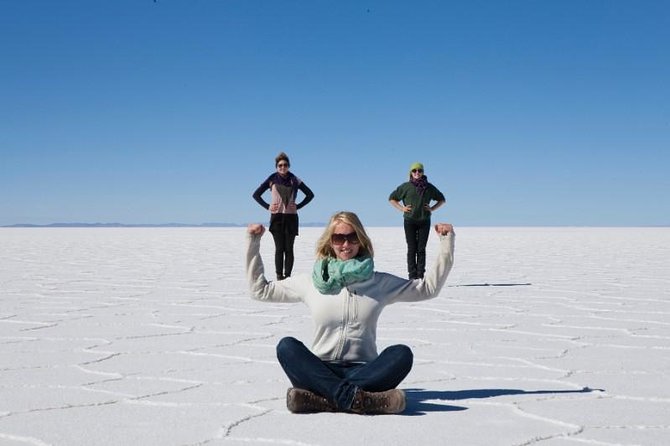 If you are traveling to Bolivia, a day trip to the Uyuni Salt Flats is something that can't be missed. Cruise along out-of-this-world landscapes and take incredible perspective photos in the world's largest salt flats.

The Salar de Uyuni or salt flats is one of the world's highest deserts, surrounded by mountains and volcanoes that reaches 5000 meters (16,400 feet) above sea level.

Start your tour with a visit to Uyuni's 'train graveyard' to see the first locomotives in Bolivia. Then, visit the small village of Colchani (salt miners workshops next to the salt flats) before continuing on to the great salt flats of Uyuni. Along the way, see many piles of salt and the 'eyes of the salt' (big holes in the salt flats where the water, from underneath this death lake, still comes out by high pressure).

Take photos as you cruise along the vast white expanse of salt, and visit a hotel made completely of salt. After lunch, travel to Inca Huasi (Fish Island), in the middle of the salt flats, where you will have time to take a hike to the top of the island to see giant cactus and rock formations made of petrified coral.

Take time to organize your group for fun perspective and proportion-distorted photos on the blinding white surface of the salt flats. Then make your way to the foot of thebig Volcano Tunupa (5,434m / 17,828 feet) to appreciate a nice view and get some pictures. Return back to Uyuni around 7pm, stopping along the way to enjoy a fantastic sunset in the Salar of Uyuni.

Please note that these costs are subject to change without prior notice.

Tips for Guide and Driver (Please keep in mind that tipping is common in Latin America and would be greatly appreciated.

WEATHER NOTE: During the rainy season from January to April, the Salt Flats fill up with water so it is not possible to cross them in the same way as during dry season. As a consequence, the itinerary is modified during that period. The main changes are usually as follows: Instead of stopping at the Inca Wasy (Fish Island), we stop at a place where the water reflects the sky and where it seems that the sky and the ground merge into one. Partial refunds cannot be made due to weather conditions.