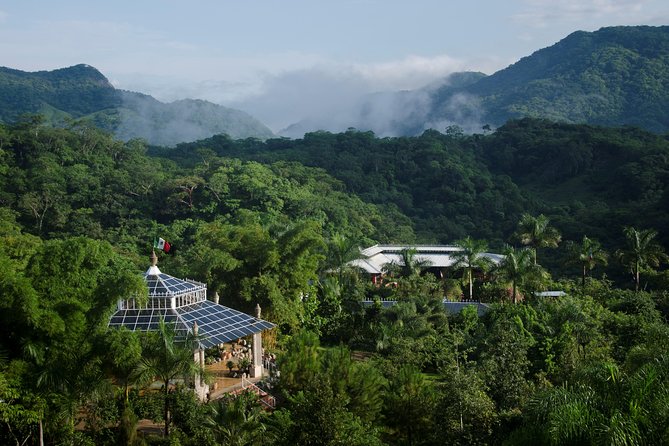 The Vallarta Botanical Garden - Where Mexican plants meet the imagination! Visit the World Famous Vallarta Botanical Garden and explore over 11 hectares (nearly 30 acres)of tropical gardens and native forest preserve filled with incredible Mexican flora as well as exotics from around the world. With an abundance of both cultivated and wild beauty surrounding you, the stage is set for an unforgettable time.

Your entry to the Vallarta Botanical Garden is a ticket to natural adventure. Wild discovery and floral fascination awaits in the Gardens plant houses and throughout its forest preserve hiking trails. You may also choose to swim in the Los Horcones" tropical mountain river atthe Garden (bring swimwear), dine in the magnificent Hacienda de Oro Restaurant, or sit back and observe the abundance ofbirds and butterflies that call this natural sanctuary home.

Nearly every day brings something new into bloom at the Garden from such well known delightful Mexican plants as vanilla and chocolate to stunning local endemic trees, bromeliads, and orchidsmany of which do not yet grow in any other public garden!

The Vallarta Botanical Garden is the place where Mexican plants meet the imagination, so don't miss a visit to this place.

Welcome flower for the ladies

Food and drinks (available for purchase at the restaurant)

Pets must be kept on a leash and picked up after

Note: From December to March, a guided 1pm tour is included with your ticket (except for Christmas Day and New Year's Day when the Garden is closed). From April to November (when the Garden is closed each Monday), guided tours are not normally offered, but self-guided experiences are available during these months by using maps (purchased separately) and reading bilingual interpretive signs (Spanish and English).