In The Footsteps Of Van Gogh In Provence From Avignon 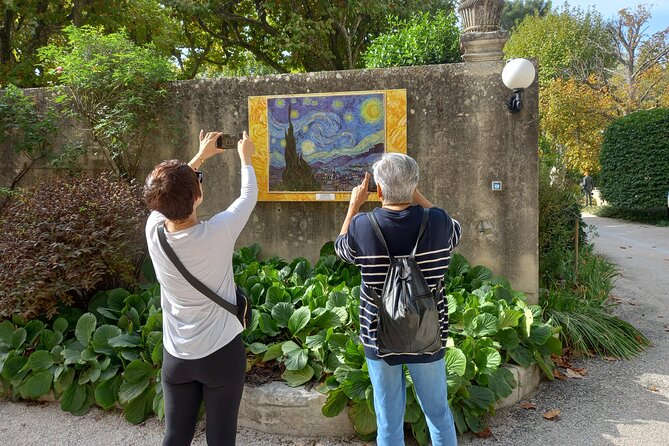 Follow in the footsteps of a Post-Impressionist master on this 6-hour Van Gogh in Provence small-group day trip. Visit UNESCO-listed Arles and discover many of the sites which stirred Van Goghs creativity. In St-Rmy de Provence, you will visit Saint-Paul de Mausole, the mental hospital where the painter stayed for a year. This is a tour for Van Gogh's lovers.

After choosing the start time to suit your schedule, meet your guide and hop aboard your air-conditioned minivan at your hotel in Avignon then head out of the city to begin your Van Gogh in Provence day trip. Considered by many to be among the finest painters of his generation, Van Gogh spent a number of years in Provence and it was here that he produced popular works such as Cypresses, Irises and The Starry Night.

Stop first among the olive groves and cypress trees at Les Antiques in St-Rmy de Provence, a beautiful landscape of Roman ruins painted on many occasions by Van Gogh. Admire highlights such as the triumphal arch and the funeral monument with your guide, and learn how they inspired the master during his time in the south of France. Visit the Saint-Paul Asylum (own expense), where Van Gogh painted his Wheat Field series from May 1889 to May 1890.

Continue on to Les Baux de Provence, an ancient village nestled on a limestone outcrop high in the rolling Provenal hills. Explore the cobbled streets of its historic center and take in top attractions such as the Museum of Santons, the Htel des Porcelets (a beautiful 16th-century house) and the Romanesque St Vincent Church.

From April, 2017, you will enjoy the audiovisual show in the Carrieres de Lumieres (Quarry of Light): reproductions of famous paintings are displayed on the walls of the quarry while music is on. The show is closed in January and February, more time will be allowed in the village of Les Baux during this period.

Next, walk in Van Goghs footsteps during a tour of Arles a UNESCO World Heritage site. Learn about its rich Roman history at the ancient amphitheatre, and discover the sites which inspired this talented artist to produce famous works such as The Yellow House and The Night Caf. Afterward, enjoy a little free time to explore Arles at your leisure.

When your time in Arles comes to an end, hop back aboard your minivan for the return journey to your hotel in Avignon, where your Provence day trip will come to an end.

Hotel pick up / drop off

Entrance tickets to monuments, unless specified

Children under 4 years old are not allowed on tours