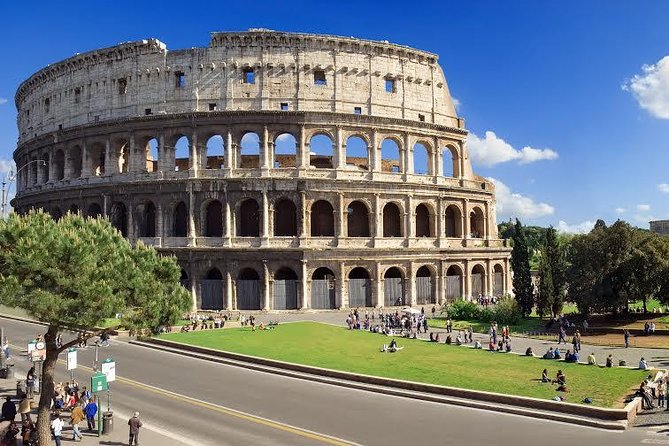 Spend the day exploring the history of popes and emperors during this6-hour tour of Vatican city and ancient Rome. Spend the morning at the main attractions of the Imperial City, including the Colosseum. Then, discover the highlights of the Vatican museums in the afternoon.

Start your full-day tour meeting your guide at the Arch of constantine.

Explore the vast Colosseum (Flavian Amphitheater) to experience up close the greatest arena the Romans built. Your guide will bring 2,000 years of history to life, telling stories of the ferocious battles between man and beast put on for the delight of Roman citizens.

follow in the footsteps of Roman emperors on a walk through the Imperial forum. Learn how it was once the center of religious, political and commercial life in Rome. Hear the history of the Temple of Antoninus and Faustina. Learn the story of the Tabularium. Go to the Temple of Hadrian, now incorporated into a building in Piazza di Pietra, where you can see the original Roman street level below ground.

End your morning tour at the Pantheon, the majestic temple of all gods. Commissioned by Marcus Agrippa in 27BC, its massive interior and inlaid marble floors are home to a burial site since the Renaissance era, where the tombs of Raphael and the kings of Italy can be found.

discover the worlds most precious art collection. Skip the long lines to enter the museums, and tour in a group of no more than 13 people for a more intimate experience. Collected by popes over many centuries, the collection includes works by Michelangelo, Raphael and Bernini.Go to the Octagonal Courtyard to look at the Belvedere Apollo statue. Discover Greek and Roman masterpieces in the Pio Clementino Museum. Wander through the Gallery of Tapestries to see Flemish pieces by Raphaels pupils. Marvel at works by ancient cartographers in the Gallery of Maps.

go inside St. Peter's Basilica to see more masterpieces by Michelangelo, Raphael and Bernini, including Michelangelos La Pieta beneath the dome of the worlds largest church.

Entrance fees will be paid directly to your guide at the meeting point.

If you are a Student between 18yo and 25yo, please select "YOUTH" price section, and specify it to us in the "Special Requirement Section", in this way we can provide for you a reduced ticket. Without any specifications we will provide a ticket for an Adult. Please bring with you a forma Sudent ID to show prior Tour departure.