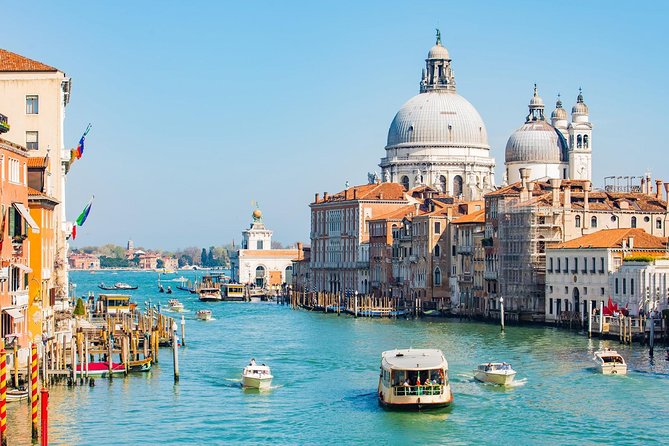 Book this 1-hour boat tour as it is the best way to appreciate the beauty and uniqueness of a city built on water is by boat. Gliding through Venice's Grand Canal and minor canals, you will be introduced to the splendid palaces, churches, bridges, gardens, and warehouses lining the city's liquid streets. Your luxurious motor launch boat tour of the Grand canal brings the magic of Venice alive. What's more? It is ideal for photographers!

Unlike a regular Gondola ride, this Grand canal boat tour takes you through many diverse areas of the city for a thorough introduction to the city of Venice.

Step foot on your boat near St Marks Square, admiring St Marks Basilica and Doge's palace along with other landmarks as you disembark. While you ride, you will learn about the origins and evolution of the Grand canal, Venice's most important 'street.

Your guide will enlighten your group about Venetian architecture as well as the trade schools of Venice such as the Scuola Grande di San Marco that provided the foundations for the mercantile empire to flourish.

Then, take a fascinating journey through Venices minor canals to see parts of the city that are seldom visited by tourists. Take in the charming ambiance as you float through these less crowded canals.

The boats are small enough to navigate the narrow canals, with enough space for you to comfortably sit outside to take photographs and listen to the detailed commentary provided by your guide. All boats are equipped with microphones and speakers so you can clearly hear the information.

Tour is not suitable for people in wheelchairs or with walking difficulties as passengers are required to step down onto the boat when boarding. The variation of the level of tides can make the vessel unstable.

Boats are partly covered and partly uncovered. In the open area, there is room for 8/9 people normal size.