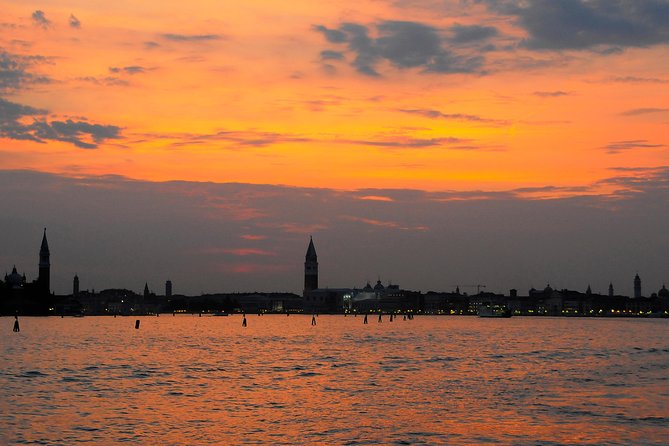 Enjoy magnificent views of the Venice islands on a 1.5-hour sunset cruise. Head out in the cool of the evening and float across St Marks Basin, past the island of Guidance in the Venetian Lagoon, and out toward the age-old island monasteries. Admire the tranquil waters as you glide along, and as the sun sits heavy on the horizon. After the ride, you will arrive in a restored Venetian palace to drink a glass of Prosecco or a soft drink sitting in their beautiful garden.

Step aboard your boat near San Zaccaria Church in Venice, and enjoy fine views of the city from the water as you embark on your cruise. Marvel at the ancient waterside buildings and bridges as you glide across St Marks Basin, past the island of Giudecca and into the Venetian Lagoon.

Cruise gracefully past the ancient monasteries on San Clemente, San servolo and San lazzaro degli armeni islands, as the suns rays cast an orange glow over the Italian brickwork. These small islands sit a little south of the city itself and have been home to monks, pilgrims, crusaders and soldiers for centuries.

Cruise toward the small island of SantAndrea, home since the 16th century to a large fortress that was built to defend the city and protect it from attack. Let the crew navigate you expertly along as the sun sits heavy on the horizon, leaving you time to take advantage of the spectacular light to take as many photographs as you like.

Then, continue to the island of Vignole, a pleasant setting enjoyed by both the Romans and Venetians as a vacation destination. Finally, cruise towards its neighbor, SantErasmo, a place once used as a port for the islands in the Venetian Lagoon. Today, SantErasmo is best known for its fresh fruit and vegetables that are grown in abundance. After 1.5-hours out on the water, return to the start point where your cruise finishes.

The tour will stop in a typical Venetian Palace to give you the chance to sit in a beautiful and peaceful garden and drink a glass of prosecco or soft drink.

1 glass of prosecco or soft drink after the taxi ride