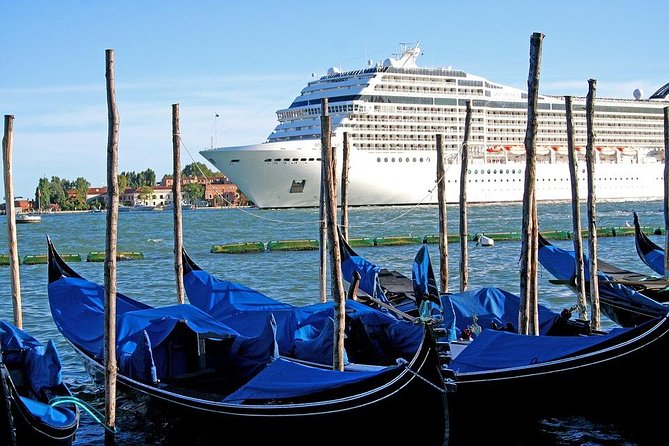 There is only one way to travel from Venice cruise port (Venezia Marittima or San Basilio) to your Venice city hotel by private motorboat! Book this cruise transfer for a fast, fun and hassle-free journey to your hotel. Board your motorboat, sit back and take in the sights of Venice as you glide along the Venetian lagoon. Traveling by private motorboat is the only way to arrive in Venice!

Transfer services are available 7 days a week for 1 to 6 people and 6 pieces of luggage. When making a booking, you will need to advise your cruise details and your Venice hotel details (if applicable). Your transfer will be confirmed within 24 hours of booking and you will be provided with a travel voucher to present to the hostess. It's that easy!

You can choose from 2 different transfer options:

Due to the Hotel Marriot location (Isola delle Rose), transfer to/from this Hotel are subjected to a surcharge of 20, payable on spot

Meet and assist at your hotel

1 to 6 people transferred in a private vehicle

Brand of vehicle used may vary depending on your specific travel date.

Each traveler is allowed a maximum of 1 suitcase and 1 carry-on bag. Oversized or excessive luggage (e.g. surfboards, golf clubs or bikes) will have certain restrictions. The vehicles CANNOT accommodate excess luggage. Please send an inquiry prior to travel to ask if excess luggage is acceptable. Additional fees will be charged on the day of travel for excess luggage. Baby seats are not available.

Transfer is wheelchair accessible but if assistance is required, passenger must provide their own carer and wheel chair assistant MUST be requested at time of booking

Due to the Hotel Marriot location (Isola delle Rose), transfer to/from this Hotel are subjected to a surcharge of 20, payable on spot