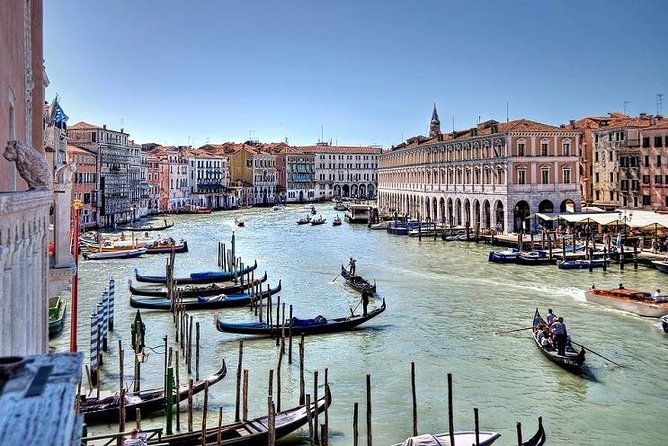 Discover the famous sites of Venice on this walking tour, followed by a ride through the citys canals on an iconic gondola.You will be captivated by the beauty of Venice, made up of 117 small islands connected to each other by 400 bridges. Let yourself be seduced by one of the city considered among the most beautiful in the world and, together with its lagoon, it is a World Heritage Site by UNESCO.
You will learn the fascinating history of Venice as you wander through narrow alleys and over stone footbridges, and then hop aboard a Venetian gondola for a leisurely ride along the Grand canal.

Explore the streets and squares of Rome in a walking tour of 3 hours, combining art and architecture, legend and history. You will meet your guide at the entrance of the main train station Santa Lucia. She will guide you to discover the loveliest corners of this extraordinary city, built upon wooden pilings, from Saint Mark's Square to the Doges Palace, including the bell tower and the famous Grand canal.
You will walk across the legendary Calle Varisco. According to the legend, it is not possible for a murderer to walk the calle without being crusche by the walls, which would near to one another until they manage to kill him or her and, by doing so, punish his or her impur soul.
During this enchanting tour,  you will admire the breathtaking Grand Canal, with its play of colors and lights that will remain etched in your heart forever.
Let yourself be surprised by the many treasure hidden in the narrow streets of Venice and its enchanting canals. Lose yourself in an unforgettable experience.
After exploring the citys romantic streets by foot, climb aboard a traditional gondola boat for a romantic ride along the citys famous canals. Navigated by a friendly gondolier, cruise by spectacular historic structures along the Grand Canal and float down smaller watery ways in the Fenice neighborhood.

It is recommended to wear comfortable shoes