Priority Access To Alhambra And Generalife Gardens In Granada 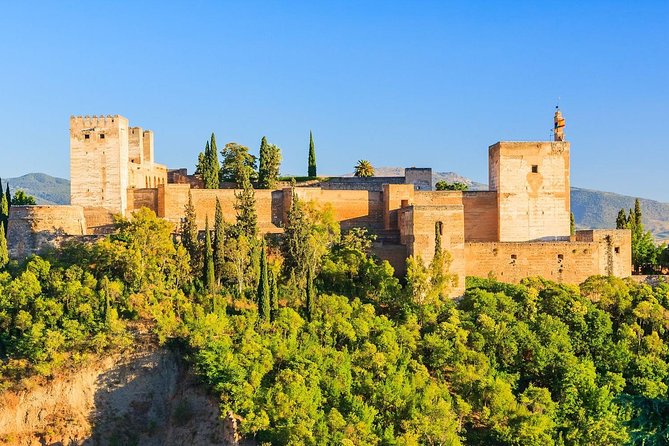 Experience one of Granadas iconic landmarks without the hassle of large crowds on a 3-hour tour of the Alhambra. With a priority-access pass, you'll gain early entry to the UNESCO-listed landmark before it becomes crowded, and embark on a tour of the Alhambra palace complex with a knowledgeable guide. See the Alcazaba Fortress before strolling among the exotic greenery of the Generalife Gardens.
Nasrid Palaces are not included in this tour.

Your Alhambra experience starts directly at the Alhambra, where you'll meet your guide and travel to the World Heritage site for early entry before most crowds arrive.

Learn about the history of the palace complex and the influence and importance of the Alhambra and Generalife in Spain, where the sites have been declared a National and Artistic Monument and Historical Gardens. During your tour, admire the architectural styles of the palace, including the Gate of Pomegranates, the Washington Irving monument, Pillar of Charles V, and the Dehesa of Generalife. The wealth of art, decoration, and scenery create an incredible setting with plenty of photo ops.
Nasrid Palaces are not included in this tour.

The Alhambra reserves the right of admission to those clients who have not provided all the required data. If you have not sent all the information requested, you may be denied access to the monument for reasons completely unrelated to Amigo Tours and refund will not be authorized.

You must bring your ID or Passport with you. The staff of Alhambra can require it at any moment and you will not be able to access the monument without it.

Nasrid Palaces are not included in this tour